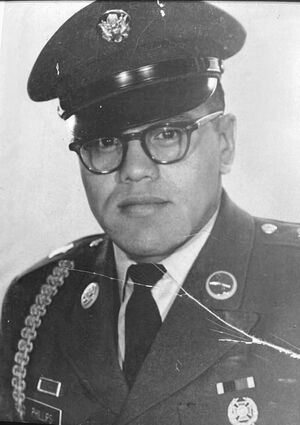 A memorial was held Oct. 22 at the Haines ANB/ANS Hall for Paul Phillips, a career soldier who also operated a TV and radio repair shop in downtown Haines.

Phillips died at age 85 at Juneau's Wildflower Court on Oct. 18. He suffered complications of Parkinson's disease.

Born May 5, 1937, Phillips was the oldest of 11 children of Daisy and Paul Eli Phillips. "Paulie" grew up in the old Native village neighborhood on Front Street in Haines and was focused and driven, brother John Phillips said this week.

"He wanted to get things done today. Not yesterday, not tomorrow, but right now," his brother said.

Paul Phillips attended Haines High School where he made the basketball team and also played trombone in the school band. He joined the Alaska Territorial Guard in 1955 and attended basic infantry training at Fort Ord, Calif.

In 1958, he enrolled in the Haskell Indian Nations University in Kansas, then known as the Haskell Institute, becoming an electronic technician.

Three years later, after enlisting in the newly formed unit of the Alaska Army National Guard, Phillips changed his military specialty to communications, receiving special training at Fort Benning, Ga. He joined the regular Army in 1962 and was sent to Europe as a communications specialist. He was deployed to Greece during the 1967 Arab-Israeli War.

After an honorable discharge, Phillips joined the Haines Guard unit, eventually leading development of an Engineer Detachment of the Alaska Army National Guard based in Haines.

Phillips was promoted to Staff Sgt. First Class after engineering equipment was stationed in Haines. The Engineers unit grew to 30 soldiers, including three of Paul's younger brothers – Eli, Howard and John.

In 1983, Phillips was named platoon sergeant for the Engineers, which won commendations for emergency work in Tenakee Springs. Under Phillips' leadership, the unit also built roads in Metlakatla and a rifle range in Juneau, expanded the Haines rifle range and renovated the portage railway in Oliver Inlet.

Besides owning a TV and radio repair business out of a shop in the Chisel Building in the 1960s and 1970s, Paul Phillips also operated a television system that broadcast videotapes of programs mailed here from the Lower 48, his brother said. "He could fix TVs, radios, tape players, you name it. He liked to stay busy," John Phillips said.

In 1993, Sergeant First Class Phillips completed his last rear detachment assignment and was recognized for a dedicated military career with the award of the Army Commendation medal. He retired from the military July 4, 1993 and moved to Juneau, where he enjoyed fishing, participating in Native traditions and the company of family members.

"His beautiful smile, sense of humor and loving hugs will be dearly missed," family members said in the funerary program. Graveside services were held at Jones Point Cemetery.

Paul Phillips is survived by brothers Eli Phillips and John Phillips of Juneau and sister Nancy Cimmino of Montana, as well as by many nieces and nephews.

He was preceded in death by his parents as well as by sisters Flora Beierly of Juneau, Vivian Taylor of Anchorage, Virginia Kinsey of Sitka, and Pauline Case of Haines, and by brothers Fred Phillips and Howard Phillips of Juneau, Milton Phillips of Anchorage and by five infant brothers.