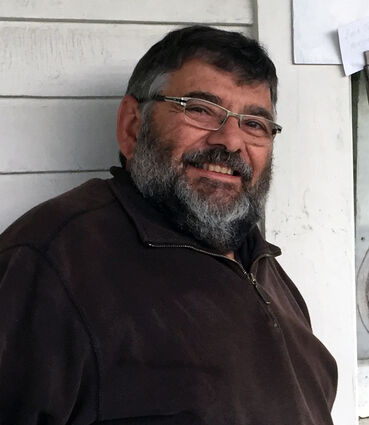 Sally and Marie Boisvert's father, Tom Boisvert, Professor Emeritus at Greenfield Community College in Massachusetts, died on March 14 from cancer at home in Northfield, MA. Part of his ashes will be scattered in Haines this summer by the family.

The highlight of his retirement was frequent trips here, starting in 2007. In Haines, Tom continued applying his lifelong "Super Dad" carpentry and handyman skills. Over many visits he helped his older daughter Sally construct her homestead and Four Winds Farm and his younger daughter Marie create home gardens when she lived in Haines before returning to Northfield to help care for him. He had many friends here and volunteered to restore windows at the historic Fort Seward barracks building in appreciation of the local history. He greatly enjoyed playing with his two young local grandchildren.

Thomas W. Bosivert was Born on Nov. 26, 1948 in Lewiston, Maine to Wilfred and Bernadette Boisvert He graduated from St. Dominic's High School in Lewiston, Maine, the University of Southern Maine, and Utah State University where he received his Master's degree in Education and met his future wife, Joanne Gardner. They wed Sept. 3, 1977.

In the fall of 1978, he joined the faculty at Greenfield Community College and he and Joanne settled in nearby Northfield in the Pioneer Valley. For 37 years, Tom taught in the media program and the art department. He encouraged students of all ages and walks of life. He was a kind and gentle teacher and when out and about was often greeted fondly by one of his many students or former students. He served on the Northfield Recreation Committee and coached girls softball teams as well as cheering on his two daughters in all of their pursuits.

He enjoyed restoring old houses and took particular interest in window restoration. Together he and Joanne restored three houses in Northfield, often involving their daughters.

He was an avid cribbage player, lover of craft beer, homemade pizza and the Yankees. He enjoyed a good laugh with friends and meeting new people.

After retiring, he grew heirloom tomatoes and saved their seeds. Each spring he looked forward to planting and selecting from over fifty varieties he had maintained. He shared his "Tom's Tomatoes" seeds with friends and gave away hundreds of plants.

He is greatly missed by his wife of 44 years, Joanne Gardner; daughters Sally Boisvert (Raphael McGuire) of Haines, and Marie Boisvert of Northfield; a sister; a sister-in-law; and his beloved grandchildren, Colleen and Cormac McGuire of Haines, as well as many nieces and nephews.