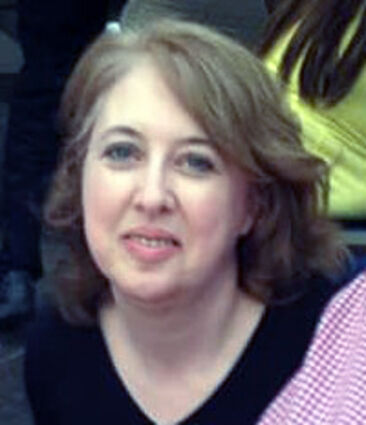 A celebration of life was held last week in Hermann, Missouri, for former Haines and Skagway resident Michele Fehlings, 57.

She was a member of the Hermann hospital board of directors, on the regional library board, treasurer of the local food pantry and a Hermann business owner.

"Her family, many friends and business associates all will miss her terribly," brother Jerome Fehlings said.

In Skagway, Fehlings managed Corrington's on Broadway for years and met the love of her life, the late Mick McCarter.

In Haines, she loved their home at Lutak and working for Roger Schnabel and Southeast Roadbuilders.

She especially liked being John Schnabel's unofficial administrative assistant. The former Haines sawmill owner and reality TV star was "like a grandfather to her," Jerome said.

Michele Fehlings was born in Washington, Missouri, on Nov. 14, 1965. Her parents, Ralph and Lois Fehlings, were descendants of the original "Hermann German" settlers and avid gardeners.

"During summer months there was always something to pick or can or juice or pickle or preserve - and I disliked every minute of it! I looked forward to the day when I was grown up, had a job, and could go to the grocery store and buy what I wanted," Fehlings wrote on her blog.

She attended Hermann High and Lindenwood College in St. Charles, Missouri, where she studied fashion design and marketing.

Lindenwood alum Nancy Corrington visited the college just before Fehlings' graduation and offered her a job in Skagway. "When Mrs. Corrington approached her, she jumped at it. Michele wanted an adventure and she made it one," her brother said.

She met McCarter at the Red Onion Saloon in 1988 and they quickly became a pair. They lived in his much-photographed log cabin at Long Bay.

"It was the most charming cabin imaginable. He was an amazing decorator," friend Margaret Sebens said, "and Michele was an immaculate housekeeper."

They wed on January 2, 2002, on a visit to Charlotte, North Carolina, prior to moving to Haines. "Mick said, 'We have got to get married, it's the right thing to do, we are going to own a house together,'" Fehlings said in McCarter's 2016 obituary.

They had returned to her hometown in 2008 due to his heart condition. The couple restored and renovated several Hermann properties that became Grapevine Guest Cottages.

Fehlings also earned an MBA and worked for the Missouri Department of Education managing grants.

In her "Coming Home Again" blog, Fehlings wrote that she and McCarter "blindly followed" Faulkner's philosophy that "the happiest people are those who are too busy to notice whether they are or not." She described herself as "an aspiring writer, an avid reader, a self-proclaimed homebody and a pretty good cook. I am secretly addicted to HGTV."

"Michele was never a gusher but she was thoughtful and caring and made sure you knew she cared about you. She is the only grown woman I know who sent Valentine's Day cards to friends. It was very surprising and touching. She was a good and wise and steady friend to many, and she was dearly loved," Sebens said.

Fehlings' husband Mick McCarter preceded her in death. In addition to Jerome and Carolee Fehlings, Michele leaves two nephews, three great-nieces and three great-great nieces on the Fehlings' side and many McCarter relatives.

Friends will gather to scatter her ashes in Haines in the fall.