Haines dominates at the home track meet against Juneau 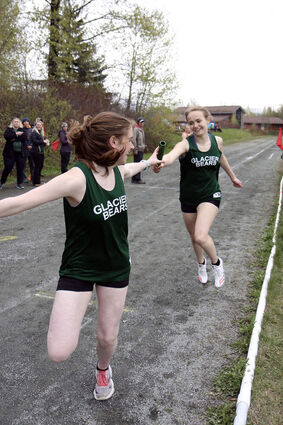 Avari Getchell hands the baton off to Avery Williamson during the relay event. The girls placed first beating Juneau by more than 34 seconds.

The Haines track team dominated the Thunder Mountain Falcons and Juneau-Douglas Crimson Bears at the home track meet May 13-14. The boys placed first in nine of 14 events. The girls placed first in four events and second in five.

Gillham and Holm took first and second in the discus, respectively, at the Capital Invitational in Juneau from May 6-7. Gillham threw a season record with a distance of 121 feet and 2 inches at that meet. Gillham is the 2021 state champion for the discus.

"It's very exciting to go into regionals running the 400-meter dash," said Jones. "Even though it's only my third time running it, I'm feeling good about the race and improving my time. I'm glad to be able to run with Caleb Holm and to see how we stack up, especially following our tight finish at the Haines meet."

The boys team ran a 4 by 100-meter relay for the first time this season. The team's fluid handoffs helped them cross the finish line three seconds before the other teams and set a solid benchmark time of 49.47 seconds.

Emma Dohrn won both the discus and the shot put, with throws of 74 feet 2 inches and 26 feet one inch, respectively. Gracie Stickler placed third in both events.

"I'm really excited to see how (Grace and I) do at regionals," said Dryden, "I'm hopeful that we will take first and second. This week we'll be focusing a lot on getting good marks and mechanics. I think that it's an amazing opportunity to be able to compete with Grace. Since our eighth-grade year, we've always competed in sports together and we've always used each other to better our performances."

Ari'el Godinez-Long placed second in both the 800-meter run and the 1,600 meter-run. Avery Williamson gave the team another second-place finish with her performance in the 300-meter hurdles.

Both the girls' and boys' 4 by 400-meter relay dominated the Juneau teams. The boys ran a 3:57.88-minute relay, defeating the second-place team by 27 seconds. Each athlete ran a sub-60 second split. The girls ran a 4:52.69 in their relay, defeating the second-place team by over 34 seconds and finishing more than 200 meters in front of the other teams.

The Haines meet was the last invitational before regionals and state. The Haines track team will be heading to Ketchikan this weekend, May 20-21, to compete for a regional title and a chance to qualify for state. Times and placings can be accessed through athletic.net. 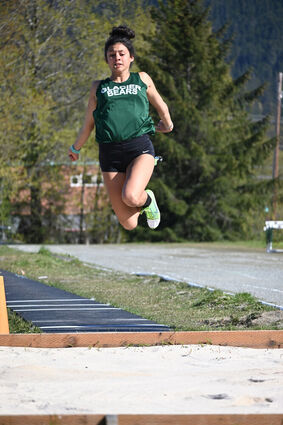 Grace Long-Godinez won the long jump with a season record of 13 feet 8 inches.

The team set 25 new personal records at the Capital Invitational in Juneau from May 6-7.