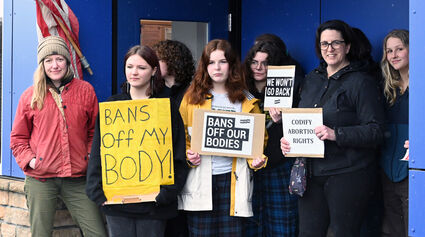 Residents gathered at the courthouse Tuesday afternoon to protest a leaked draft decision from the U.S. Supreme Court that, if final, would overrule a 1973 ruling, in Roe v. Wade, that guaranteed abortion rights.

About a dozen residents gathered outside the Haines courthouse Tuesday to protest a leaked draft decision by the U.S. Supreme Court to overrule the landmark 1973 decision in Roe v. Wade, which held that the Constitution guarantees women a right to...