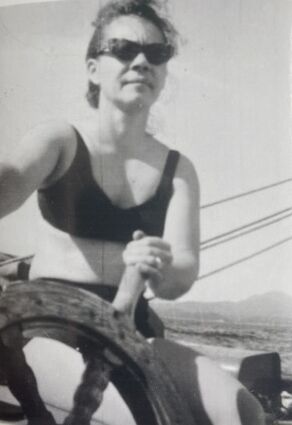 Pat Metcalf, a sailor and adventurer whose gypsy spirit led her to Tenakee Springs and finally to Haines, died at her FAA Road home March 24. She was 93.

Patricia Eileen Metcalf was born to Learnie "Pete" Peterson and Sarah "Sally" Wininger-Peterson in Compton, Calif. on July 29, 1928. During her childhood much of the area was cultivated for vineyards and farms and Pat's early memories included driving in her grandfather's farm truck to market.

A welder and salesman, her father was a traveler, renovating an old bus into a "house-car" and leading family vacations to national parks across the country.

"She had gypsy in her blood. That's where she got her wanderlust, was from him," Metcalf's daughter Lynn Pratt said.

As a young woman, Metcalf was a skilled roller-skater who also enjoyed diving for abalone offshore of Santa Barbara, Calif. Her attraction to the sea stuck.

After high school, she married Gordon Jr. Livermore and gave birth to a daughter but the marriage didn't last. As a single mom, Metcalf moved on, first to New Orleans.

"She didn't let much get in her way. She didn't have a handicap. She hit things head-on," her daughter said.

Pat was working as a dinner waitress at a Phoenix restaurant in the early 1960s when a customer needed a van delivered to Juneau. She and a restaurant busboy delivered it and Metcalf decided to stay.

She found work as a waitress in the Baranof Hotel's Bubble Room and an apartment above the theater on Front Street. She bought the "Buccaneer," a 38-foot Nova Scotia fishing schooner and met Lucky Metcalf, an electrician and FAA employee. They married in 1966.

The pair planned to sail around the world but their craft developed engine problems off the coast of Mexico. The turned north, landed in Friday Harbor and went to work on building the 78-foot Arctic Tern, made with a ferro-cement hull. "Mom did all the teak and mahogany interior," Pratt said.

In the late 1970s, they sailed back to Alaska, fishing along the way and stopping in Tenakee, where they started a homestead four miles inland from town. They lived in a tar-paper shack, modified a skiff into a fuel barge and kept a float house that served as a pen for their goats and chickens.

"Lucky built a hydro plant and they put in solar panels that tracked the sun. They wanted to be self-contained," Pratt said. They raised Great Pyrenees dogs and tested roses for a seed company and raised two grandchildren. Pat also served on the Tenakee's city council.

When Lucky's health was failing, they moved to Haines in 1993, bringing a modular home to FAA Road.

Larry Hura, a former Tenakee resident who put together the couple's Haines house, said he remembered Pat Metcalf as outdoorsy and determined, riding four miles in a skiff to town alone.

"It didn't bother her what the weather was doing, if she wanted to come to town, she would," Hura said.

Pat Metcalf was preceded in death by brother Gordon Peterson of California. She's survived by a son, Patrick Metcalf of Missouri and daughter Lynn Pratt of Haines and by three grandchildren. She also is survived by many step-children and their families in Alaska and the Lower 48.

Her ashes will be spread at the Tenakee homestead along with those of other family members in summer 2023.