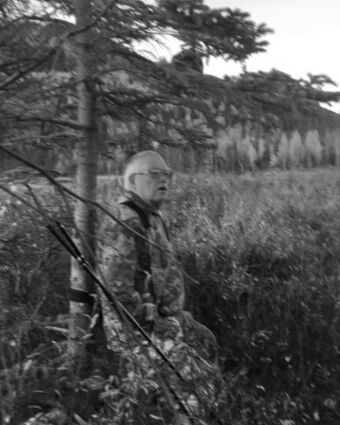 There will be a memorial celebration of Rob Miller's life later this year at his favorite moose camp. Rob died suddenly on Feb. 2 at his home in Haines. He was 65. He had served as a dispatcher and then a patrol officer for the Haines Police department. After retiring, he worked as a laboratory technician at the SEARHC clinic where his wife Jody Miller is a nurse and he delivered propane.

Rob loved to hunt, fish and trap and said Alaska was his "target rich environment." He enjoyed having old friends from Alaska and Michigan visit here to hunt and fish. One hunting buddy noted that "all game that flies, swims, or grazes (and can be harvested in season) will no doubt rest easier now," but that his friends will miss Rob dearly.

Robert Miller was born to Duane and Betty (Severson) Miller on Feb. 16, 1956 in Clare Michigan. He graduated from Clare H.S. in 1974. As a teen he worked agriculture jobs, but after high school graduation he enrolled in a police academy. He was a patrolman at the Clare Police Dept. in the 1970s and 80s and rose to the rank of sergeant. Rob and Jody (Rulapaugh) married on July 17, 1981. They moved to Alaska a few years later, first to Juneau and then Haines.

Rob is survived by his beloved wife and best friend of 40 years Jody Miller; daughters Lisa Ptak and Lorna Mathews; grandchildren Olivia, Jason and Ryan; siblings John (Connie) Miller and Jane (Mike) Iutzi and many other relatives and friends.

Donations in Rob's memory may be made to the Haines Salvation Army.