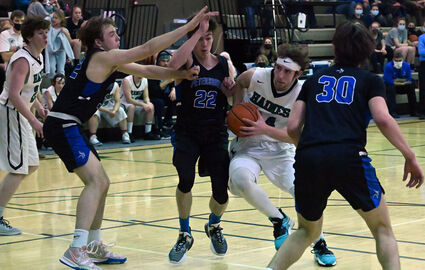 Gilham drives in a game against the Petersburg Vikings. The Bears split the series against Petersburg last weekend.

The conference games kicked off Friday with four nail-biting quarters. The Bears trailed 9-13 at the end of the first. They shut the Vikings down in the second quarter, preventing them from scoring at all. Haines was up 17-13 at the start of the half.

The Bears maintained their lead throughout the third quarter. With 4:49 left in the quarter, Petersburg's Michael Durkin fouled junior Eric Gilham. Durkin disagreed with the call and yelled at the referees, which earned him a technical foul. Gilham made both of his foul shots. Junior Luke Davis shot the technical foul free throws and made one. Haines extended their lead to 22-14.

With one minute left in the third quarter, Haines applied full-court pressure. The Bears stole the ball and capitalized on the steal twice in a row. The Bears led 31-22 at the end of the third. Gilham was the leading scorer with 11 points. Davis followed with 10 points.

The Vikings made a strong comeback in the fourth quarter. The Bears maintained their full court press, but the Vikings learned how to break it. With 1:20 left in the game, Petersburg trailed 36-39.

With 57.2 seconds left, the Bears had a turnover. Gilham inbounded the ball to Davis in the backcourt when only the frontcourt was permitted. Petersburg scored a layup after the mistake to make it a one-point game.

The Vikings came out of the huddle needing only one shot to win the game. They passed inside to Kyle Biggers, but the Haines defense quickly enveloped him and stripped the ball. The Glacier Bears won the game, 39-38.

The Petersburg Vikings brought greater intensity on Saturday. The Bears were behind 7-14 at the end of the first quarter.

The Bears applied full-court pressure a minute into the second quarter. Petersburg quickly adapted to the press. They were able to break it and score. Petersburg led 28-24 going into halftime.

Petersburg kicked off the third quarter with an inside pass to Biggers. Trailing 26-34, the Bears applied full-court pressure once again. It was difficult to determine the effectiveness of the press. It led to many Petersburg turnovers, but also to many fast breaks. Petersburg led 46-36 at the end of the third quarter. Zander Willard and Gilham were the leading scorers with 11 points each.

The Bears kicked off the fourth quarter with a wide-open layup from Gilham. The Bears began full-court pressing immediately after. Davis played tight defense on the point guard, but was called for blocking. Davis picked up another foul a minute later, his fourth foul. With three minutes and 56 seconds left in the game, Davis fouled out after being called for blocking. The Bears were down five points.

Willard took over as the point guard. With three minutes left in the game, Petersburg wasted time passing the ball four feet off of the three-point line. The Bears needed to get the ball back, so Gilham went for the steal. He was called for a reaching, his fourth foul.

The Bears maintained their aggressive full-court pressure. While trying to inbound the ball, Willard took the charge from a Petersburg athlete. The Bears got the ball back with two minutes left. The team set up Gilham for a deep three, but Gilham's shot fell short. The Vikings secured the rebound and took it down the court.

The Vikings held the ball at midcourt. The Bears were running out of time to score, so Gilham fouled Petersburg's Lathum Johnson. This was his fifth foul and took him out of the game.

"I've never ran the offense in a game that actually mattered," said Willard. "I've never been the point guard. It was stressful. Coach told me to be like Klay Thompson, and I said, ``Challenge accepted."

After securing the defensive rebound on the other end of the court, Willard drove to the Bears' basket. He passed to Jacob Weerasinghe in the left corner. Weerasinghe dribbled to the top of the three-point line and passed to Phoenix Swaner who was unable to hold onto the pass and it went out of bounds. Haines called a timeout after the turnover.

The Bears used the timeout to substitute four bench players into the game. Willard remained in the game to help run the offense. The Bears were unable to score and lost the game, 48-56.

Both the boys and girls will be traveling to Tok for a double-elimination basketball tournament this weekend. They will be facing seven other teams. Senior night will be held at home Feb. 25-26 against Metlakatla.