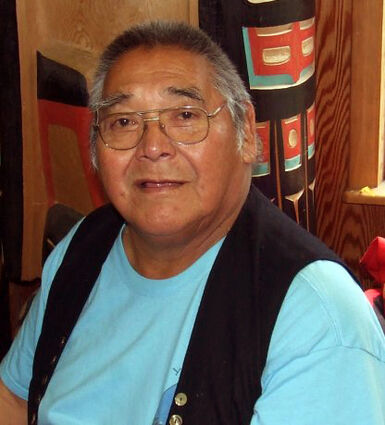 He suffered from lung disease and diabetes.

Wife Charlene Katzeek said that moments before his death, her husband had asked for an oxygen mask to be removed and said, "I'm ready to go on my next journey."

Katzeek was one of Klukwan's few fluent Tlingit speakers and was a standard-bearer for traditional Native ways.

He served as the caretaker for the Salmon Hole House of the Gaanaxteidi clan, and his knowledge of traditional ways – learned from Dan Katzeek, his father – helped villagers choose a tree to carve into a traditional cottonwood canoe years after Archie Klaney, the last villager to carve such a canoe, had died.

"A bunch of us were looking for a tree. He helped guide them to find the right tree," said villager Marsha Hotch. "He knew what to look for and knew the basics of it. That was enough to get our project started."

Katzeek also served as a mentor in a Tlingit language class led by Marsha Hotch. Hotch said Katzeek was a patient mentor who learned a lot himself. "I think the mentors and learners empowered each other."

In recent years Katzeek was a leader of the Chilkat Dancers traditional dance group, imparting traditional understandings to young dancers.

"I learned a lot from him about our language, our culture and traditions," said niece Lorraine Kasko.

Smith Katzeek was born in Klukwan on Dec. 10, 1935, the youngest of six children of Dan and Margaret Katzeek. He attended the BIA school in Klukwan and served in the National Guard. He worked as a commercial fisherman and as a longshoreman for Schnabel Lumber Co. and other stevedoring companies.

Katzeek was a hunter who shared hunting stories and often described himself as "being born across the river" from Klukwan. His family had traditionally used the Chilkat Lake area and qualified for Native allotments there.

Katzeek served on the Klukwan village council and was a regular at bingo games in Haines and Klukwan, playing his last card in Anchorage in September, his wife said.

Christy Tengs Fowler said her parents were adopted by the Katzeeks, making Smitty her brother. "I learned a lot from him about life and love. He was our compass. I will miss his kind eyes and big smile, and even his teasing!"

Katzeek was preceded in death by his parents and by siblings Tom Katzeek, George Katzeek, Ruth Kasko, Marian Kelm and Watson Katzeek. He is survived by wife Charlene and by children Smith Katzeek Jr. of Klawock, Pamela Altig of Astoria, Oregon and by Peter Katzeek, Daniel Katzeek, and Deanna Strong, all of Klukwan.

Smith Katzeek was buried in Klukwan.