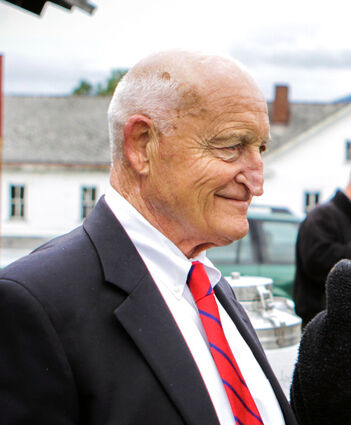 A family funeral service for Bob Vuillet, 88, was held Dec. 30 at St. Michael and All Angels Episcopal Church. He died suddenly and peacefully Christmas Eve of an apparent stroke. His daughters Heather Lende and Suzanne Vuillet-Smith were with him. He had just celebrated a big family holiday meal and was taking a nap on the couch.

As son-in-law Norm Smith noted, "Bob really knew how to make an exit." Vuillet was a storyteller and would have loved to tell this one.

Vuillet had lived in Haines since October 2020 following a decline in his health. He divided his time between his daughters' homes. He liked the company of his family and old Haines friends, visits with Dr. Reeves at the dental clinic, occasional Sunday services at St. Michael's and the Presbyterian Church, and keeping up with the local and national news. He was also known to readers of his daughter's books and blog as Papa Bob.

Robert Vuillet was born in London on Sept. 17, 1933 to Samuel Vuillet, a member of the French Legion of Honor, and American Frances (Jeanne) Vuillet. He moved to Jersey City, New Jersey with his mother and sister when World War II broke out. He attended the Emerson School for Boys, Taft where he was captain of the wrestling team, and Middlebury College where he played lacrosse and football. His childhood friendships lasted a lifetime. He met Sarah (Sally) Jane Smith of Ridgeway, Pennsylvania at Middlebury. They married in 1956, settled on Long Island, New York, had three daughters and, typically, a female Labrador Retriever, prompting him to say "Girls, girls, girls," often. Sally was an administrator at Locust Valley Friends Academy, and he worked out on the track and in the gym and was dubbed "Macho Man," a nickname he continued to use for the rest of his life, only half-jokingly. "I think I got to marry Heather because I could keep up with him on a morning run," Chip Lende said.

Vuillet ran in local races including the Long Island and New York City marathons. He played golf mostly with his wife and was happy to say she was better than he was. He swam across the Hudson River each summer for Pete Seeger's clean water initiative. On annual visits here he trained in Rutzebeck Lake. He liked attending his Augustine and Lende grandchildren's high school and college sporting events and trips to his father's hometown in the Jura region of France with his daughter Suzanne and granddaughter Isobel Smith. He gardened on Long Island and later on a farm upstate, which he shared with his daughter Kathleen and her family, and was especially proud of his tomatoes.

He retired from The Movado Group, a watch company, when he was 79. He worked alongside founding chairman Gedalio Grinberg and later with his son Efraim Grinberg, who said, "Bob viewed sales as a noble profession. He was extremely well-respected throughout the jewelry and watch industry." Grinberg said they had fun running together in cities around the world on business trips.

Sally Vuillet died in 2006, a few months shy of the couple's 50th wedding anniversary. "She was the love of his life," his sister Jeanne Vuillet Poole of Huntington, New York said. He is also survived by daughters Heather Vuillet Lende and Suzanne Vuillet-Smith of Haines, and Kathleen Vuillet Augustine of Johns Island, Florida; grandchildren Samuel and James Augustine, Isobel Smith, Eliza Dorn, Joanna Hinderberger, Sarah Elliott and Stojanka Lynch, and Christian Lende; nine great-grandchildren; four nephews and a niece and the Brush family.

Memorial donations may be made to the Chilkat Valley Community Foundation's Fitness and Wellness Fund.