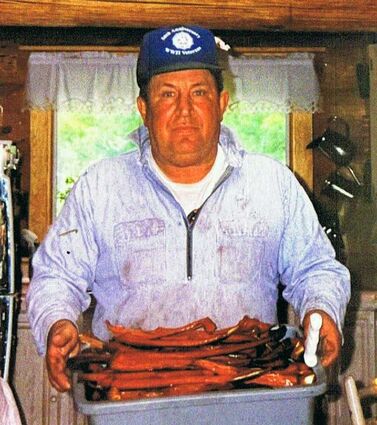 When he was about six years old, Hank Jacquot tied his favorite dog to a sled and set out across frozen Kluane Lake to find Santa Claus.

At around the same age, he grew frustrated while kept in a horse-drawn wagon as his mother was berry-picking nearby. He snapped the reins and the wagon took off with him inside and no idea of how to stop it.

"And now you know why, when he was younger, they tied him up to a clothesline," daughter Mary Jane Valentine said at a memorial observance Nov. 4 at Jones Point.

The self-determined son of a prominent Yukon family, Jacquot died Nov. 4 at his family's homestead at Wells Bridge from complications of heart disease. He was 87.

Henry Coulter Jacquot was born Feb. 7, 1934. He was one of five sons of Eugene Jacquot, an immigrant to Canada from France, and Ruth Mary Dickson of the Yukon. His ancestry included great-grandfather Chief Thlunaut and a great-grandmother who was sister to Skookum Jim, a discoverer of the Klondike goldfields.

His Tlingit name, Kutzee, was an honorable one given to him by the wife of Patsy Henderson. As a boy, Patsy was in the party of men who discovered the Yukon gold.

Jacquot's parents and an uncle, Louie Jacquot, owned and operated a settlement in Burwash Landing, Y.T., including a two-story hotel, restaurant, bar, store, and a guiding and freight business. They also operated a sawmill and a mine.

When Jacquot wasn't away at school his father kept him busy at the family businesses, including wrangling horses, cooking on guided hunts and driving the freight truck.

Jacquot witnessed the building of the Alaska Highway as a youth. In awe of bulldozers pushing down trees, he became determined to operate heavy equipment.

During his childhood, Jacquot survived a busted appendix, sniffed some gas and fell off a tower, and was hit by a Standard Oil truck while riding a bicycle in Vancouver, B.C. (The company bought him a new bike.)

Once, while a Pan Am plane was landing at Burwash airstrip to take him off to boarding school, Jacquot hid under a pile of hay in a barn. "He was due to go out on it, but they never did find him," Valentine said.

By the time he started school in Haines, Jacquot was behind in classes due partly to time lost recovering from mishaps. He left school after eighth grade and met and married Edith Berry of Haines. After a wedding in Burwash, Edith accepted an offer to work at the post office, and the couple moved back to Haines.

Hank served in the Alaska National Guard in Anchorage. He found work driving trucks and driving piles for the Wells and Lutak River bridges, the dock at Letnikof Cove and at other locations. His local jobs included at the Schnabel sawmill and on construction of the Small Boat Harbor.

Jacquot's good friend of many years, Sam Sampson, worked on many projects with him. "Hank was a can-do guy," Sampson said. "He could do just about anything. He was a good worker and well liked."

In later years, Jacquot worked as a commercial gillnetter on his boat Tammy Kay, named after his granddaughter. He also commercially fished in Bristol Bay.

Hank and Edith had a house built on Officers Row in Port Chilkoot in the 1960s where they lived until moving to the Wells homestead in 1991. There, Jacquot stayed busy subsistence fishing and keeping a large garden.

Perhaps owing to his father's cooking skills, Jacquot prepared and smoked meats that he shared with his extended family and others. "Every time people would stop by, he'd bring out food. If nothing else, he'd have a tray of smoked fish, crackers and tea," Mary Jane said.

A friend and neighbor, Ray Briggs described Jacquot as an "all-around good guy" who was like a father to him. The two of them commercially logged Native allotments up the Chilkat River in the 1990s.

Cousin Dennis Dickson of Burwash remembered Jacquot as an avid hunter who had first-hand knowledge of working and packing horses and living off the land. "He had lots of stories to share about Burwash when he was younger."

Jacquot had a close friendship with stepfather Freddie Donnelly. "They would take Ruth's dog team either up the river or down the road to gather wood, fish or check the traps," his daughter said.

Jacquot lived life to the fullest and in 70 years here, had many friends, she said. "Just driving to town, he had so many stories to tell – 'Archie fell in the river there,' or 'Clarence always stopped to visit Porcupine Shorty," or 'This is where we fished for the dog team,' and so on," she said.