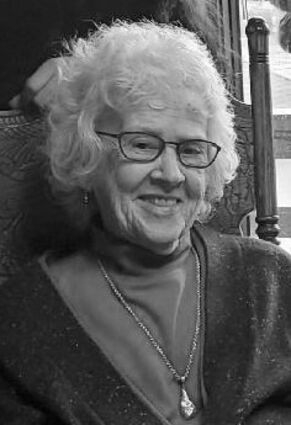 Juneau resident Donna Lorene Peel, 89, passed away after a brief illness on October 25, 2021 in Juneau, Alaska. She was at her home surrounded by family.

She was born June 1, 1932 in McPherson, Kansas the only child to Wilbur and Ople Phelon. On August 2, 1953 she married Robert Loren Peel also of McPherson, Kansas. They began their family life in Topeka. While living in Topeka, she started a family and supported husband Bob as he pursued his teaching and football coaching careers. She was a devoted mother who always put her family first.

In 1965, the family moved to Juneau. Husband Bob had accepted a teaching job at Juneau Douglas High School. She moved with her husband and two young sons in the summer of 1965, traveling the new Alaska Marine Highway in a Volkswagen Karmann Ghia pulling a one-wheeled trailer. Moving the family to Juneau was planned as a 2-3 year adventure. However, they fell in love with the weather and it became instead merely the beginning of a long and wonderful life in Alaska. She often joked that she "dared" husband Bob to take the job in Juneau. She was the risk taker of the family.

Donna made her life with her family in three different homes on Starr Hill in Juneau. However, like many families moving to Juneau at that time, the family lived first for a short time in the Fosbee Apartments, which still exist today. Throughout the years, her home was a popular stop-over spot for friends traveling through Juneau from Haines and other places in Alaska and the lower 48.

Donna held several jobs outside the home which was not the norm at that time. After coming to Alaska, she worked several years for the Juneau School District as an assistant in the Superintendent's office and in the Instructional Materials Center. Following her time with the School District, she worked a career with the Alaska Legislature from which she retired in the early 1980's.

Cooking and food preparation were Donna's passions. She was an expert at feeding crowds at a moment's notice and as her grandson would say, "She can make old shoe leather taste like a gourmet treat!" Most of all, Donna enjoyed spending time with her family and friends both in Juneau and at Chilkat Lake near Haines. She was always ready to feed anyone who showed up and no one ever left her house hungry. The kitchen in her cabin at Chilkat Lake was a social hub in the summer and she was ready to serve coffee and treats to anyone who showed up. There are many in both Haines and Juneau who have fond memories of her generous hospitality. Donna was loved beyond measure. She was spicy. She was fun. She was generous. And she was loved by her family and many friends. We will miss her.

She was preceded in death by her husband Bob in 2005.

Donna is survived by her two sons Robert Laurus Peel (Kristi) and granddaughters Kori and Danielle Kuaana of Juneau and Douglas Phelon Peel (Nancy) and grandson Peter Peel (Marissa) of Juneau. She is also survived by several cousins and nephews and their families residing throughout the U.S. and in New Zealand.

No Funeral will be held at her request. Her ashes will be placed in the family plot at the McPherson City Cemetery and at Chilkat Lake. A memorial service is planned for a future date.