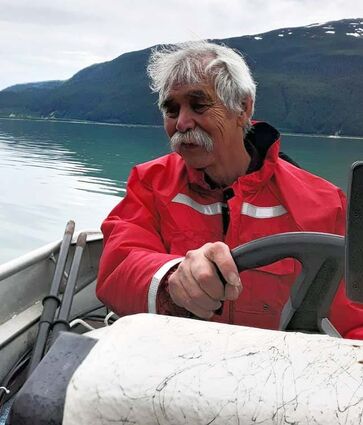 At Saturday's memorial service for David Land, 77, the ANB Hall was full to the standing room. Affection for him, as well as his deep roots in the community were on full display. The Chilkat Dancers stood in regalia behind a casket draped in a Chilkat blanket representing Land's Kaagwaantaan and Wolf House affiliation woven by his grandmother, the famed artist Jennie Thlunaut. Near it were the banner of the 101st Airborne Division he served with in Vietnam and the steering wheel from his first wooden gillnetter, the Seabird.

Land was remembered mostly for his friendly banter, devotion to his wife Teresa and their family and his quiet Christian faith. He looked forward to holding a grandson due in January, Teresa said. Land died Oct 22 at the Alaska Native Medical Center in Anchorage of Covid-19. He was diagnosed with pulmonary fibrosis eight years ago and believed every day after that was a gift. "David always knew his life was in God's hands, that all our lives are, and there's a peace in that," Teresa said.

For decades Land was one of the "Morning Guys" at the Bamboo Room and "brightened up" owner Christy Tengs Fowler's days, she said. She composed a poem for the service. "Yours was a familiar face" she wrote (and read), "The kind that lends the world its grace. The ready twinkle in your eye. The silver hair like clouds of sky. Yours was usually full of smiles. With stories that went on for miles. Each time I filled your coffee cup. You'd say something to crack me up."

Luke Land said that when his father visited him in New York City, he struck up conversations with people on the subway. "I tried to tell him it wasn't the safest place but pretty soon he'd be telling his life story."

Fellow fisherman and Vietnam veteran Bill Thomas was one of the Morning Guys too and friends with Land since childhood. He said Land was a "very capable" fisherman, and fun to work on a boat with. As a paratrooper in Vietnam, "David was the point man, meaning he was the first out going into the jungle. He had a natural instinct to see things that were not normal." Thomas noted that it was unusual that Land's platoon included two other young friends from Haines, Ron Martin and John Berry. Martin was the medic, and Land credited him with saving his life after he contracted malaria. Returning home from combat was difficult for Land and others, Thomas said. "I never saw David fight or display anger at people. He was always calm." Luke Land said his father was proud of his service but didn't talk about it, and he never hunted afterward.

Land's life pivoted again when he bought his nieces private lessons in order to meet the new music teacher, Teresa Giannetto. They were married Aug. 12, 1978 and the reception was a picnic at David's Cove. Gillnetters ferried the guests from town, salmon was grilled on sticks over the fire and one friend arrived with a trash bag of fresh garden lettuce. "We had so much fun," Teresa said. The Lands loved their five children and taught them how to care for their own families, Luke Land said. Teresa later taught music to the primary students at the Haines School. Her husband built sets for the seasonal concerts. "The children would get excited and know we were close when 'Mr. Land' showed up," she said.

David James Land was born Aug. 22, 1944 at Providence Hospital in Anchorage to fisherman Leo Land and Edna James Land of Haines. He grew up next door to the Raven House on Front Street in what was the old Native village and had five brothers and sisters. His Tlingit name Yaakwaan "is an honored one" Luke Land said. Land's mother walked to and from work at the Letnikof Cove cannery. He attended Haines High and Mt. Edgecumbe, played basketball and fished a set net at David's Cove (no relation). In addition to fishing commercially, he worked as a union pile driver on docks and bridges in Alaska, including the Haines Ferry Terminal, was a certified welder, and a longshoreman.

"Dad was quick thinking and creative," daughter Gwen Sauser said. He helped build the family home and could fix most things mechanical or wooden "that other people gave up on." Land loved cars, and had a 1965 GTO. He was a big fan of Haines High basketball and city league games and he took his mother to the Gold Medal every year until she died.

Sauser said that when she and her sisters were on their father's fishing boat "we brought books and teapots" and he played with them when he was free. In the roughest weather she wasn't afraid, "because Dad was there."

He will be missed, Christy Tengs Fowler said. "David was very special to us."