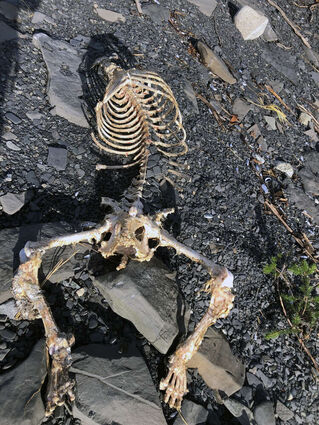 Courtesy of Tom and Patricia Faverty.

A large headless animal skeleton was found on the Ayiklutu Trail in Chilkat State Park last week. Haines resident Tom Faverty, who wrote a letter to the editor this week on the matter, said he suspected the skeleton belongs to a brown bear he recently encountered in the area that could have been poached. State wildlife biologist Carl Koch said he believes the skeleton is a bear's but that he can't be sure which species. A black bear could have been legally harvested. The Alaska Department of Fish and Game requires hunters to turn in a harvested bear's skull and hide for sealing. Complicating matters, the skeleton was found in the tidal zone, so it might have washed up on the beach. The Alaska Division of Parks and Outdoor Recreation is investigating.