Armour, adventurer and painter, dies at 94 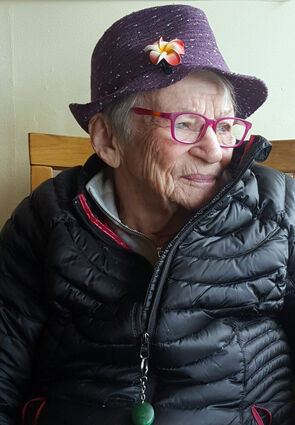 Agnes Theresa Armour died on her birthday, Saturday, Oct. 16 at the age of 94 after complications from a stroke.

As her health declined, she moved to Haines five years ago where she lived with her son, Mike Armour. While living in town, she became a prolific painter. She painted acrylic pictures of flowers, elephants and landscapes, and gave her paintings away to residents at Haines Senior Center.

"She loved people. I don't think she ever met anybody she didn't like," Mike said. "The people at the senior center, they were all her friends. She would paint pictures for them and give them away. She just loved everyone. It's hard to imagine somebody being that nice."

Agnes Armour could also be found about town perusing items at Talia's Treasures and the Salvation Army store as her love of shopping for a deal equalled that of painting.

"Going into a retail store and paying $40 for a top was not her style," Mike said. "Going to the Salvation Army and finding that same top for $2.50, that would make her whole day."

"I loved seeing her come in," said Talia's Treasures owner Tammy Hauser. "You could see the smile in her eyes. She loved looking for hats that she could 'bling out.' She'd add gems and rhinestones to her hats."

Agnes Armour was born on Oct. 16, 1927 in Onaka, South Dakota, a town with less than 200 people that served as a railroad station stop. By the age of 14, both parents had died and she had to help take care of her siblings, Mike said. She was the second oldest in a family of five, and outlived all her siblings.

She met William Armour when she was 20 years old. The couple moved to Ketchikan and married in 1948. They later moved to Point Baker where they each trolled commercially from their own boats, Agnes Armour with Mike's older sister, Kathy, in tow.

"My father had his boat and she had her boat," Mike said. "She took my sister in the boat with her, wrapped her up and put her in a basket and went fishing."

While living in Point Baker, Kathy caught pneumonia and the family moved to Juneau after life in a remote cabin proved too difficult with a child. "To get to town was a major adventure," Mike said. "They thought it would be better if they lived in a town."

Agnes Armour retired to Lacey, Washington in the late 1990s and joined a senior citizen police patrol and became president of the senior citizens bowling league that boasted 450 members. She was an excellent bowler, "an unstoppable force," Mike said, who bowled until the age of 80 when arthritis forced her to quit.

"This was a woman who had boundless energy," Mike said. "She was a small lady with a big personality. I used to call her my little fireball. She was amazing."