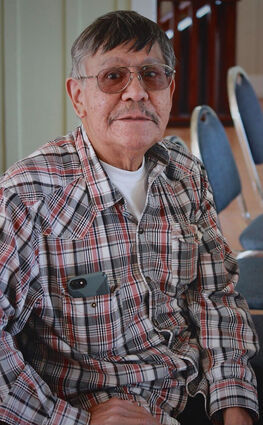 Generous Jake, former longtime resident, was well known and loved for his kindness and time for others. He would help people put up and finish sheetrock for free, and he always had time to share a story. He was from the Tlingit Eagle-Killer Whale clan and was known for his love of Eagles. He had many Eagle feathers, and we trust he is soaring with eagles.

Jacob (Jake) Paddy Goenett was born in Juneau on April 4, 1952, the fourth of ten children born to Rachel Sarah Ann Dick (Goenett-Jennings) of Angoon and James Goenett of Juneau. Jake's parents were married in Juneau on June 1, 1948.

Jake's great-great grandfather was Gushteiheen, the head of the Keet Hit (Killer Whale House) of Dakl'aweidi (the original Killer Whale) clan, and his wife was Unc col Cheesh.

Jake's paternal grandparents were James Goenett from Haines and Josephine Clark, from Klawock.

Jake graduated from Juneau Douglas High School in 1972. In 1975 Jake met Judy Moff from Poulsbo, in Seattle and they were married on June 4, 1976. In 1977 they packed up the car, kids and dogs, drove up the Alcan Highway and settled in Haines for the next 40 years, where Jake worked for Tlingit Haida and Klukwan Inc. on many construction projects in Southeast, Alaska.

At the construction sites he was known to teach some of his coworkers how to put up sheetrock. Besides working and helping others he enjoyed time with his family. His favorite pastimes included teaching his grandchildren how to shoot, ice fish and play dominoes. He enjoyed the Fogcutter, joking around and cruising the highway in his Ford listening to country music.

He is survived by his wife of 46 years Judy Lynn Goenett; children Kenneth, Jenny and Joanne Lemieux; 14 grandchildren and 13 great-grandchildren.

Jake passed away peacefully with family by his side on September 26, 2021 in Gig Harbor, WA. He was 69. His ashes will be spread at Sullivan River, where the Eagles soar, and his favorite place in the world.

Condolences may be mailed to Judy at 810 E Trails End Drive, Belfair, Washington. Haines Memorial donations may be sent to Crystalyn Lemieux via Facebook or https://gofund.me/a9fd7b56.

The local memorial will be at the ANB Hall Sat. Oct. 16th at 3 and online via Facebook live.