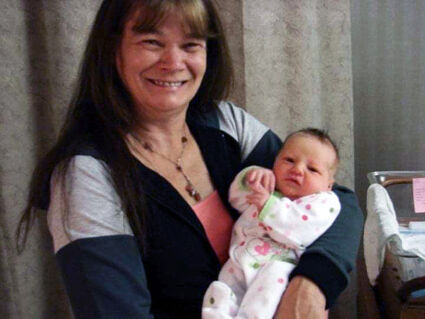 Leslie Ann Whittington died Sept. 10 at her daughter's home in Olathe, Kansas, surrounded by nine of her 10 children.

She was 65 and afflicted with lung cancer.

Family and friends said Leslie's 23 years in Haines, including as cook, driver and manager at the Haines Senior Center, were among the happiest of her life. "The last months of her life she spoke of story after story about 'her seniors' at the senior center. She was so happy to serve them," said daughter Carolyn Ewens of Olathe.

Sally Lix, a customer at the senior center, said Leslie's care and devotion to the people she served was evident. "She was always good to all the people there, and a lot of fun. She liked what she was doing."

Leslie Ann was born Nov. 27, 1955 in Los Angeles to Harry Nicholas and Pheral Marlett of Santa Maria, Calif. She spent most of her life in Pismo Beach and Arroyo Grande, Calif., and also lived in Pahrump, Nev., where she operated her own cleaning business.

She learned about Haines through a friend and moved to town in 1998, finding work cleaning offices.

Brandy Peters said her family launched a paper lantern on a local beach and sang Dani and Lizzy's "Dancing in the Sky" on the day of Leslie's funeral service in Kansas.

"She will be missed by so many people who knew her as a friend, mentor, grandma and, as some of us called her, 'Mama Leslie,'" Peters said. "I will always be grateful to her kids for sharing her with (my husband) and my babies who loved picking mushrooms, berries and dandelions for grandma for salads to go with barbecues."

Besides four-wheeling to her favorite berry-picking spots, Leslie liked hunting for beach treasures and was skilled at canning food.

Carolyn Ewens said her mother had great patience in the kitchen, showing her how to make homemade pie crusts and salads. Leslie made birthday cakes for each of her 10 children to their specifications. Her eulogy said, in part, "Leslie loved making babies, and she loved her babies well."

A memorial service and reception for Leslie Whittington were held in Overland Park, Kansas.