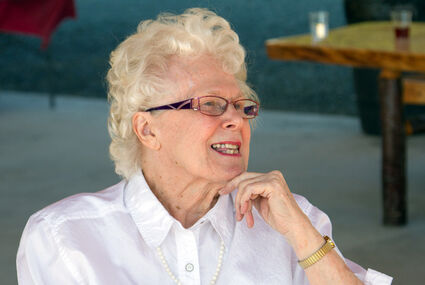 Nicki Hopper combined a career in banking with decades of quiet service to others.

"She gave me a present once, a piece of driftwood she had painted that said, 'Bloom where you are planted,'" said longtime friend Jan McPhetres. "That's kind of the way she was. She made her way without a lot of fanfare. She was very stable and very lovely."

Born Mildred Ellen Cedergreen on July 26, 1926 in Steptoe, Wash., Nicki was the fourth of eight children of Alfred and Chloe Cedergreen. She grew up on farms in Washington and Oregon. Graduating high school at age 16, she found work at a bank in Forest Grove, Ore. where wartime pay for women tellers included stockings – then in short supply.

Nicki married Harold "Bud" Hopper in 1948 and the family moved in 1954 to Wrangell, where Bud was hired to teach high school science and math. For another teaching job, the family relocated to Haines in 1957, driving from Oregon up the Alcan Highway in a small, Austin A40 towing a wagon full of belongings.

Making the trip with two small children and a third on the way, Bud lashed jerry jugs of water on the front bumper for washing diapers. When the trailer's axle broke in Fort St. John, they packed the tiny car to the roof.

The Hoppers found housing on Soapsuds Alley and built a home in 1964. When First National Bank of Alaska opened its branch here in the early 1960s, Nicki hired on as a teller, eventually moving up to vice-president.

Retired branch manager Dick Flegel said Nicki was good at balancing the bank's books when that was done locally. "She was a pleasure to work with. She always had a smile on her face and did a very, very good job."

Previous to computers, she would work weekends at the bank if a till didn't balance. "She strongly felt an obligation to people investing their money in the bank and wanted them to feel welcome and safe there," said daughter Nancy DeCherney.

As a member of Haines Women's Club, Nicki was instrumental in expanding the Haines public library. She worked with Lib Hakkinen on the Sheldon Museum when the collection was located in the Fort Seward barracks and managed an inn on Officers' Row for the Gregg family. A one-time member of the Haines City Council, she was also active in the Presbyterian Church.

Nicki was fond of ham sandwiches and she declared at age 90 that she would no longer feel compelled to eat salad or vegetables. She enjoyed a glass of wine with friends on evenings and watching any football or baseball game on TV. She also liked road trips, camping and cats.

An artist and crafter, Nikki painted, sewed, made ceramics and furniture and kept a garden. For years she baked eight loaves of bread each Wednesday, plus a tray of cinnamon rolls for the school's teachers and church pastor Hank Hartmann.

"She was a very efficient and very elegant lady in many ways," said Jan McPhetres. "I don't think she had any enemies, and that's hard to do in Haines."

Family members said Nicki was always concerned foremost with the well-being of others, checking on them and reassuring them with her pet expression, "It's going to be alright." She ended phone calls with, "You be careful out there."

Nicki Hopper was preceded in death by her parents, her sister Velma, brothers Virgil and Dale, and her husband of 49 years, Harold Hopper. She is survived by siblings Eldon, Marjorie, and Mary, and by her children Nancy DeCherney of Juneau, Thad Hopper of Deer Park, Wash., and Randa Szymanski of Haines.

Nikki was buried at Jones Point Cemetery next to Bud on Sept. 20. Her family asks that in lieu of flowers, contributions be made to Hospice of Haines, the ambulance service or Haines Assisted Living.