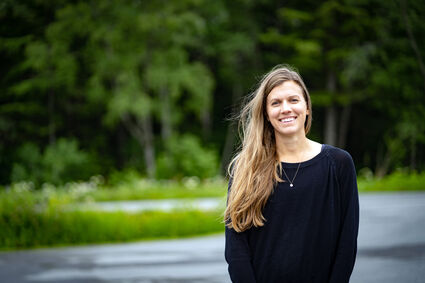 Anna Ulmer is an occupational therapist who focuses on holistic methods.

Occupational therapy is not at all what it sounds like at first glance.

"Everyone always asks me if I help people with their jobs," said Anna Ulmer, an occupational therapist recently hired at Body IQ Physical Therapy and Yoga.

Rather, she said, with training in anatomy, physiology, cognitive, behavioral and mental health, the profession is rooted in getting people back to the things that are most important to them.

It can help, "if there's some sort of disruption or trauma or disease within those daily routines and activities," Ulmer said.

Ulmer, who moved to Haines in October, said her practice has shifted over the years from traditional occupational therapy as she's become more interested in more holistic methods. Her work now blends different approaches. That shift came in part, she said, after working in hospitals.

"While the care there is incredible and the western medicine that we have is vital and amazing, as a therapist it often felt like there was more of a focus on quantity of care than there was quality," said Ulmer. "And there was this bigger whole person picture that we were missing."

Ulmer grew up in Minnesota, but said she's moved around over the past decade. Five years ago she moved to Alaska, and was in Costa Rica before that. She's spent much of her career working with children and more recently began hosting retreats centered around women's empowerment.

"I always like to say that we as a society live in a disembodied culture," said Ulmer. "So, a lot of the work I do is just getting back into your body ... starting to engage the sensations of your body, or I like to say the felt sense."

Ulmer said her work includes a focus on regulating the nervous system.

"I think there are many people who have kind of been in survival mode their whole life," said Ulmer. "Or there's many of us who are stressed and overwhelmed and find it difficult to relax or maybe have difficulty sleeping or are experiencing a lot of anxiety. And oftentimes that is directly related to what's going on with the nervous system."

She also focuses on emotions – what people do with them and how they manifest in different parts of the body.

"Science really does tell us that now, that we do store emotions in our tissues," Ulmer said. "So, we work with moving that energy and moving those emotions and creating a safe space in your body for that energy to move and for you to express. So that you can have more of a clear channel and feel more grounded in your day-to-day life."