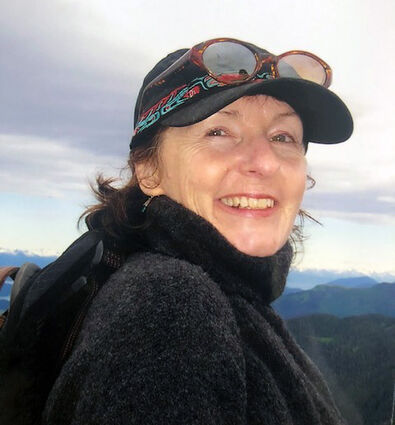 Friends and family will gather in Haines next month to scatter the ashes of Diane Sly, a tireless teacher and recognized advocate for children whose busy life included building two homes in Haines.

Sly died Jan. 29 in Washington. She was suffering from progressive supranuclear palsy, an incurable brain disorder. She precipitated her death under provisions of the state's Death with Dignity law.

"She was incredibly active," said daughter Eden Orelove. "Her friends joked that she never stopped doing things. She liked to get things done more than anyone I've ever known."

Setting the terms of her death reflected her mother's love for her children, Orelove said. "She didn't want her kids and family to see her suffer and worry about her. She always thought of others first."

Born in Greeley, Colo., July 23, 1949, Sly was a twin and one of six children of construction worker Donald Sly and Joan Moriarty, an Irish immigrant. She grew up in West Seattle and earned a bachelor's degree, later returning for a master's degree in early childhood development.

Denise Laudani of Atlanta, Ga., said her twin was smart, funny, quick-witted and determined, earning high grades in school. "I'd just sit in the back of the class and watch her work the room. When she missed school, teachers would ask, 'Where's your better half?' and I never took that to be an insult."

Deciding she wanted to see the world, Sly set off one summer with lifelong friend Bridget Smith, hitch-hiking through Europe. She made several trips to Ireland and spent substantial time in Mexico.

Sly moved to Haines in the 1970s with a group of friends that included attorney Linn Asper. She built her own cabin on Mud Bay Road and served as a legal secretary to a Haines law practice Asper shared with Dick Folta. Asper this week described Sly as a great friend who easily bonded with children.

"Diane was wonderful with my kids and grandkids. She'd come out to our house to bake bread with my grandkids," he said.

Sly taught at Harborview Elementary School in Juneau. She worked jobs that took her all over Alaska checking on the welfare of children, developing an appreciation of Native culture and art.

She worked 12 years for the social service agency REACH, serving autistic children age 3 and under. Her dedication earned her a "Woman of Distinction" Award for service to women and children from Juneau's AWARE shelter in 2001.

Sly more than once approached parents of crying children in stores and offered to watch their children while they shopped, Smith said. "She was very compassionate that way. She didn't like to see any young person suffer."

Smith met Sly when they were students at a women's Catholic college in Oregon in the 1960s. "No one was more fun or more generous. She was always animated and ready to throw a party, especially ones involving young children," Smith said.

Sly ran long-distance races, built shelves and furniture, baked bagels and challah, hung wallpaper and sewed, raised chickens and ducks, and grew vegetables and flowers. Joyanne Bloom of Juneau was one of many friends who'd gather in a wood-fired hot tub Sly built in south Douglas. "She was a great community person, always looking out for others. She was quite a woman."

Sly returned to Haines around 2010, building a home on Cemetery Hill. She organized square-dances, proctored toddlers' play time, joined the bridge club and launched a public discussion of shared housing for seniors.

More than 100 people participated in a Zoom celebration of Sly's life. "We all have our faults but she'll live on in the minds of people because she was so good," her sister said.