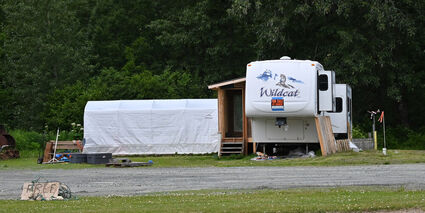 The trailer on Main Street.

A fifth-wheel trailer at the corner of 6th Avenue and Main Street drew criticism earlier this year when members of the public noticed it was being used as a permanent residence.

"It became a primary dwelling, which is not allowed for a trailer outside of a trailer park," Haines Borough planner Dave Long said. Long began serving in the position in June and said the issue predates his time with the borough.

"A permit was issued for something that was not allowed, and basically, the borough said, 'Oops, we made a mistake,' and refunded any fees," said former planning and zoning tech Scott Hansen, who served in the position in late February when the permit was revoked.

Hansen said the borough gave owners until the end of 2021 to address the problem, which was resolved as soon as the skirting on the trailer was removed and use of it as a residence ceased. A sign on the trailer says it's for sale. Laura McCoy, listed on the borough-issued conditional use permit along with her husband, declined to comment.

Long said the trailer received mixed reviews from Chilkat Valley residents. While some took time to complain to the borough, others celebrated it as an affordable housing solution.

"Some people were really for it. It's hard to afford housing," Long said.

Affordable housing has been a topic of discussion at the borough in recent months. At a planning commission meeting this winter, commissioners charged Hansen with determining whether the community has an affordable housing shortage.

The topic had been brought to commissioners' attention by the previous planning and zoning tech, Libby Jacobson, who received questions from people wanting to know if they could live in RVs, motorhomes, travel trailers, truck campers and fifth-wheel trailers outside an RV park if they met single family residential requirements like a permanent foundation, and water and sewer hookups.

In an interview Monday, Hansen said he wasn't able to take on a research project of that scale before he left borough employment. He said he's heard there is an affordable housing shortage.

"My children really like Haines, but it's really hard just to buy a piece of property, getting a down payment, the promise of consistent income for the next fifteen years just to pay the land off. A lot of people see the door closed when it comes to developing land with a modest income. It has been identified as troubling," Hansen said.

On the other side of the equation is the concern of property owners that RVs and yurts on neighboring properties will reduce property values in residential areas.

Long said as borough planner, he hopes to tackle the affordable housing issue through projects like the development of borough land on Mount Riley. He said he thinks part of the issue is defining affordable housing.

"There's long-term affordable and short-term affordable, new versus existing construction, different types of structures that need to be analyzed," Long said. Although a yurt might be cost-effective initially, it might not be the most energy- or cost-efficient option in the long run.

The yurt ban will be discussed next at the July 6 Government Affairs and Services Committee meeting.