Matanuska breaks down for second time in 2021 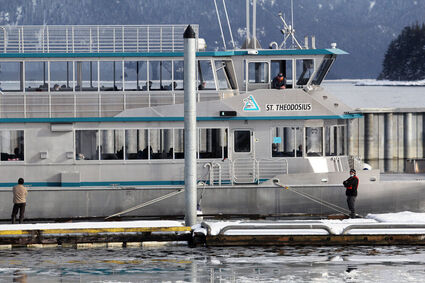 Allen Marine transported residents to and from town Tuesday, March 16 after the Matanuska's sailing was canceled due to mechanical issues. It's the third time the ferry broke down in a little more than a year.

The Matanuska ferry, the only Alaska Marine Highway vessel currently serving Haines, is once again experiencing mechanical difficulties, prompting the Alaska Department of Transportation and Public Facilities (DOT) to cancel sailings for the third time in just over a year.

"I was on vacation for a month in Florida. I was very careful to line up return flights with the ferry, because if that's messed up, you're out of luck. It only comes once a week," stranded resident Nelle Jurgeleit-Greene said. She said she arrived in Juneau at 10 a.m. Monday, rented a car and planned to run some errands before catching the ferry that evening. Then DOT notified her that the ferry had been cancelled.

"I'm in limbo. I am at a hotel. It's over $100 each day. I'm debating whether to renew both the (room and the car)," Jurgeleit-Greene said in an interview Tuesday morning. "I still have a reservation on the ferry. (DOT) said they're bringing a technician up to work on it."

She said she tried to get a flight out, but Alaska Seaplanes was booked up. She said she recognized several other Haines residents checking into the same hotel Monday night.

On Tuesday, a chartered Allen Marine vessel brought some stranded passengers from Juneau to upper Lynn Canal communities, an effort spearheaded by Skagway Mayor Andrew Cremata. The charter is expected to cost roughly $8,000, a cost largely recouped through ticket sales, which were $75 per adult. It arrived in the Haines Small Boat Harbor just before 4 p.m. Tuesday.

The charter wasn't able to accommodate everyone. The vessel can't take vehicles, so those with cars will have to wait until the ferry is back online.

Jurgeleit-Greene said she couldn't take the charter because she had more than the two-bag luggage limit. She said she's keeping her fingers crossed DOT gets things squared away on Wednesday.

DOT thinks the nearly 60-year-old vessel's current mechanical issue is related to the problems it had earlier this winter and during the 2020 winter.

"The controllable pitch propeller system and reduction gear use a combined oil distribution system, and the problem once again involves the port-side equipment," public information officer Sam Dapcevich said in written comments Wednesday morning. "A technician from the manufacturer (arrived) in Juneau Tuesday evening to diagnose and hopefully resolve the issue."

Dapcevich said the U.S. Coast Guard has cleared the vessel for a trial run with the technician onboard to transport stranded Haines and Skagway passengers. According to a Tuesday press release from DOT, the Matanuska is scheduled to leave Juneau's Auke Bay Terminal on Wednesday at 4 p.m.

"Assuming the issue is resolved over the next few days, Matanuska will resume scheduled service with a northbound trip from Juneau on Monday, March 22," Dapcevich said.

In February, when the Matanuska was experiencing an issue with its port reduction gear box, preventing the port propeller from going in reverse, a department spokesperson said if the Matanuska were to remain out of service into March, there would be no other vessels available to service Haines until the Matanuska was brought back online. Fortunately, in that case, the Matanuska was up and running again after a two-week hiatus.

In early 2020, Haines went without ferry service for seven weeks, the result of budget cuts and the breakdown of the department's sole functioning mainliner, the Matanuska, in late January. During that time, the community received four charter visits from Allen Marine including one funded by the state, one spearheaded by the Haines and Skagway school districts, and two Haines Borough-subsidized trips. Interim passenger service was largely driven by the need to transport students to and from school sporting events.