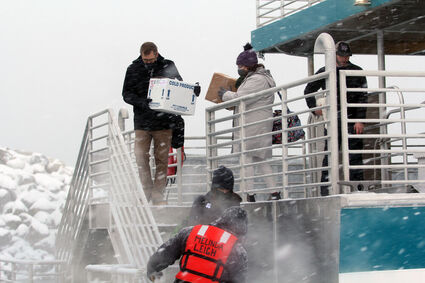 Southeast Alaska Regional Health Consortium (SEARHC) vice president of clinics Eric Gettis debarks Allen Marine boat, Melinda Leigh, with roughly 100 doses of the Pfizer COVID-19 vaccine. SEARHC chartered the vessel to get the first doses of the vaccine to Haines on Dec. 18 after winter weather prevented them from being flown in the previous day.

In the past week, more than 100 Chilkat Valley residents received the first of two shots required for Pfizer's COVID-19 vaccine.

On Friday, Dec. 18 at 10 a.m., roughly 100 doses of the vaccine arrived on an Allen Marine boat chartered by the Southeast Alaska Regional Health Consortium (SEARHC) after weather prevented the vaccine from being flown in the previous day.

"They came. Hallelujah. It's been a very, very long year," said clinic administrator for the Haines Health Center Stephanie Pattison, the first Haines resident to receive the vaccine. "It went off absolutely seamlessly on Friday. I got my vaccine and waited my fifteen minutes."

The 15 minutes are to monitor for a potential allergic reaction. Of the more than 272,000 people in the U.S. who had received the Pfizer vaccine as of Saturday, six reported severe allergic reactions, including a case in Juneau, according to U.S. health officials.

Pattison said the only lingering effect she felt was a little tenderness at the injection site the following day, similar to the experience after receiving a tetanus shot, and by Sunday, the feeling was gone.

Pattison said after receiving her vaccination on Friday, she and a team from SEARHC went to Klukwan to administer the vaccine to seven elders in the community. In Haines, health center staff administered shots to 66 healthcare workers, first responders and a few senior citizens.

Pattison said she's not sure how many people in each of these categories received the vaccine. "You had the option to be vaccinated, but if you chose to not be vaccinated or wait, it was kept confidential," she said.

Until Wednesday, Haines lacked a super-cold storage facility, so once the Pfizer vaccine arrived in the community, it had a shelf life of five days. For long-term storage, the vaccine requires temperatures between -112⁰F and -76⁰F, but it can be stored for up to five days at normal refrigerator temperatures before it needs to be discarded, according to the Centers for Disease Control and Prevention (CDC).

In an interview Wednesday, Pattison said SEARHC staff administered roughly 30 additional vaccine doses on Monday to first responders who weren't able to get to the health center on Friday and to a number of residents 80 years or older. She said more than 100 people received the vaccine between Friday and Monday. As of Wednesday afternoon, SEARHC was still working to make sure no one was counted twice, so a final vaccination number wasn't available.

Pattison said SEARHC had initially thought Haines would receive 80 doses of the Pfizer vaccine, but that turned out to be an undercount. "On Friday, we were finding that we could get six to seven doses out of a single vial. Originally, we were told we'd get five doses out of a vial," Pattison said.

The Pfizer vaccine requires two shots, 21 days apart to be most effective. On Jan. 8, Haines will receive the second "booster" shot for the vaccine. Boosters will be administered to the same people who received their first shots on Dec. 18 and Dec. 21.

Pattison said the Haines Health Center will soon receive doses of the Moderna vaccine, granted emergency use authorization by the U.S. Food and Drug Administration on Dec. 18.

"We're already working on a vaccine list for next week," she said.

The Moderna vaccine requires two shots, 28 days apart and, like the Pfizer vaccine, was shown to be more than 90% effective during clinical trials. Unlike the Pfizer vaccine, it can be stored at normal refrigerator temperatures for 30 days. Pattison said even though Haines now has a super-cold freezer for COVID-19 vaccines, she suspects most of the community's vaccines will come from Moderna in the future.

"The big thing is weather. (The Pfizer vaccine) needs to fly here directly from Sitka. If it drops below the super-cold temperature at any point, it needs to be administered within five days. The Moderna vaccine is a little more forgiving," she said.

Pattison said she thinks more people in Haines are coming around to the idea of getting a COVID-19 vaccine as more information becomes available.

"There's just a lot of fear out there of the unknown," she said, adding that those still on the fence will likely be paying close attention to how healthcare workers fare with their vaccinations.

Pattison said it's important to keep in mind that the vaccine is not just about personal protection from COVID-19-it's about protecting the community as a whole.

"It not only protects you but also those around you who can't get the vaccine-those who have had severe reactions to other vaccines, someone allergic to any of the ingredients," she said. "We need at least seventy percent of the population to be vaccinated in order to achieve (population immunity)." 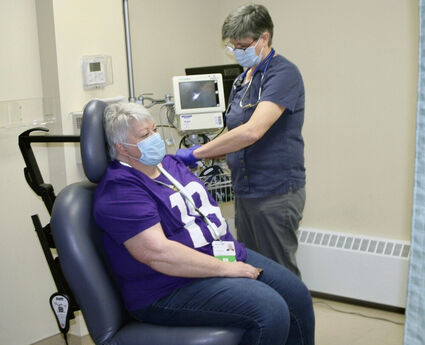 Clinic administrator for the Haines Health Center Stephanie Pattison was the first Chilkat Valley resident to receive the COVID-19 vaccine on Friday, Dec. 18.

She said although the vaccines were created on a crunched timeline, in another sense they've been in the works for many, many years. "I know people feel like the Pfizer vaccine was rushed, but we've had the technology to create vaccines for years and years, and we continue to perfect that," Pattision said.

Alaska's December allocation for the Pfizer vaccine is 35,100 doses. Those eligible to receive the vaccine initially are front-line healthcare workers, long-term care facility residents and staff, EMS and fire personnel, and individuals who are required to perform vaccinations-roughly 25,000 people statewide. In addition to doses of the Pfizer vaccine, on Monday, the state received initial doses of the Moderna vaccine.

The Alaska COVID-19 Vaccine Allocation Committee is working to identify additional populations that are a priority for receiving the vaccine, based on input from the CDC. The state doesn't expect to have enough vaccine doses for the general public until later in 2021, according to Alaska health officials.

As of Wednesday morning, there were no known active cases of COVID-19 in Haines.