What can Haines learn from Sitka's deadly landslide?

How one Southeast town is working toward a landslide warning system 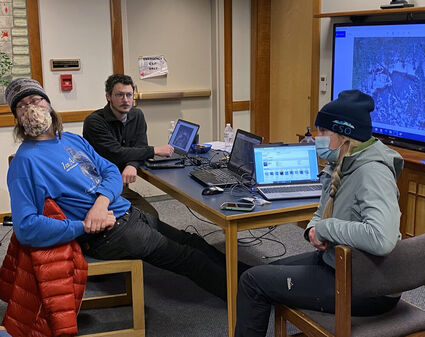 Haines Avalanche Center's Erik Stevens and Alaska Division of Geological Geophysical Surveys geoscientists Ronnie Daanen and Katreen Wikstrom Jones worked in a makeshift office set up at the Haines Borough Public Library this week as they collected data and observed hazards across the Chilkat Valley.

On Aug. 18, 2015 more than 40 landslides fell across Baranof and Chichagof Islands. The largest slide destroyed homes and killed three men in Sitka. Similar to Haines, rapid, heavy rains overwhelmed and saturated the soil structure. Within days of the slides, a group of community stakeholders and scientists came together to start finding answers to questions most people never thought to ask.

"There were just so many questions our community had," said Sitka Sound Science Center executive director Lisa Busch of the days and weeks following the disaster. "We didn't know anything about landslides. It seems so obvious now."

Busch said what started with just a couple people grew to 35 individuals that became the Sitka Geo Task Force, a collection of representatives from tribal and environmental organizations, universities and federal and state agencies. The RAND Corporation got involved and helped secure a $2.1 million grant from the National Science Foundation to conduct research projects.

For the past five years, the group has assembled disparate data sets, installed rain, soil moisture and river flow gauges and used LiDAR to create a landslide warning system. The group is creating a dashboard that will synthesize scientific data for citizens and community leaders to make choices about landslide risk, similar to the Haines Avalanche Center's avalanche forecasts.

A team of geoscientists from the University of Oregon have developed and installed low-cost sensors that monitor soil hydrology in real time. The U.S. Geological Survey has installed a much more expensive soil moisture monitor. Citizen scientists keep rain gauges at their homes, that report rainfall data via satellite to the National Weather Service. Because landslides are caused by water that overwhelms ground stability, knowing how saturated soils are in a given area, and what they can sustain, is vital to assessing risk. Many Sitkans have become well versed in the science of landslides.

"People are so interested now," Busch said. "Before, we just didn't worry that much about landslides. Now, whenever there's a big forecast for rain, people are looking at all of our data. What we're trying to do is come up with a threshold: there's this much soil moisture, this much rain in the forecast, the rivers are at this level. This is when there were landslides in the past. This is the threshold that there's landslide danger."

Another team of researchers is looking at how the public will be best served by an online dashboard and how it will be most effective. Rather than having a fireman sound an alarm, individuals can look at the data, assess the risk and have access to resources that can guide their decision making.

"It's not clear how precise a warning system is ever going to be," said Robert Lempert, risk assessment tool expert for the RAND Corporation, the nonprofit leading the research. "People came to workshops and emergency managers were uncomfortable with the idea that every time it was raining hard enough and the risk went up, they'd pull the siren. People would quit listening to it."

The dashboard is still being developed, Busch said, but the process the Sitka Geo Task Force has gone through, and the knowledge it's accumulated, could be a model for Haines.

University of Oregon geoscience professor Josh Roering has been instrumental in helping Sitka better understand where landslide hazards exist, and has been in touch with state geoteam members working in Haines. Within six months of the Sitka slides, scientists developed a map of where hazards existed in Sitka's landscape. Using LiDAR, they were able to detect clues invisible to the naked eye: chutes, narrow pathways that show landslide activity, some going back thousands of years, beneath the canopy of trees and the forest floor.

"Those (paths) have been carved over time. Dozens of those have happened in those locations," Roering said. "The landscape over time organizes itself. Landslides don't happen randomly. They have a place where they tend to start and where they tend to move to. All of the material flows out and spreads out when it gets down to the valley floor. We use these maps to figure out where deposits are over thousands of years."

In Haines, there were more than 50 landslides along Lutak Road alone, according to state geophysicists, and the geology around Haines is variable. The hillsides above the Lutak Spur Road between Chilkoot Lake and Lutak Inlet are a giant pile of sand and gravel deposited at a terminal moraine-a buildup of glacial outwash that the glacier pushed into a mound before retreating.

"This is a much bigger scale than what we've seen in Sitka," Roering said of the Beach Road slide. "It's deeper. It's wider. It had a bigger path of destruction. We don't yet know whether that scale of feature is common in Haines. What we really need to do is get this LiDAR data to see if there's signatures of this happening in the past up there. It's really hard to see without it."

Alaska's Division of Geologic and Geophysical Surveys (DGGS) geoscientists were able to use LiDAR to get a sense of Mount Riley's geological history, although the snowpack made the imagery imperfect.

"We've been able to analyze the south side of the major slide in more detail and we can somewhat confidently tell that there's been activity there in the past," geoscientist Katreen Wikstrom Jones said. "We have no idea how long ago but the slope, it's topography, indicates this is a failure prone slope."

GDDS hydrogeologist Ronald Daanen said they plan to return to Haines in the summer or fall to collect more expansive LiDAR imaging. Gov. Michael Dunleavy's disaster declaration means funding is available from the Federal Emergency Management Association to collect such data, and the DGGS will be a partner in that effort, Daanen said. That will help scientists create maps that better identify landslide hazards across the valley.

Chilkat Valley residents, along with elected officials, will have to reckon with how to respond to landslide risks. In Sitka, after landslide hazard maps were developed, zoning regulations were passed and people all of a sudden found their properties listed in high-risk red zones on borough maps.

"The concern was that we were going to scare people and devalue property," former city and borough of Sitka administrator Mark Gorman said. "That could be tremendously economically traumatic to Sitka. We know that we live in a landslide prone environment. Going out and mapping it and defining it would have some benefit but some potential consequences. I still hear echoes of that concern."

"There were voices on all different sides, but in the end it resulted in different uses that can happen in low, medium and high-risk areas," Bozak said.

"It made the development of (certain) areas not financially feasible," Gorman said. "Basically, you couldn't mitigate it. There's nothing you could do to stop that destructive force."

The Haines EOC is communicating with members of the Sitka Geo Task Force, including Aaron Jacobs, a National Weather Service hydrologist who's been working with the EOC. This week, the EOC is beginning the transition from disaster response to a planning and mitigation phase.

Busch said she wants to share the task force's collective efforts and knowledge with Haines.

"We want to help. We know what the essential pieces are that you need to put together," Busch said. "We know first-hand the devastation of having your friends and families in a small community killed and having your property destroyed. It haunts us. We know what you're going through."

Sitka too has a scar on its mountain that serves as a reminder of their disaster, and that every time it rains hard, some portion of the community still remains on edge.

"There's kind of a collective PTSD," Gorman said. "You think 'Oh my god are the hills going to come down on us?' You look at the scars on our mountains. It's an environmental scar but it's very much an emotional scar in this community. I was looking at the pictures of Haines and it brought it all back to me."

He said the biggest lesson he learned from the disaster was how powerful collective action can make a difference. "That was the most important lesson I took away from what happened in Sitka, the tremendous power that the collective can have when the chips are down," Gorman said.