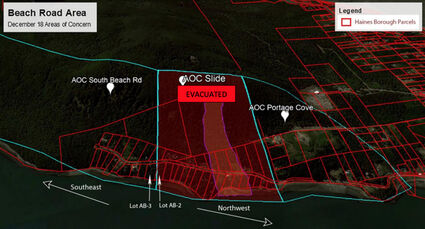 The Haines Borough Emergency Operations Center downgraded all potential landslide areas of concern to sites to "monitor for future concern" except for the Beach Road landslide area and the site of the 2012 Ripinsky slump.

Residents at the southernmost end of Beach Road can return home after state geologists downgraded the area from a mandatory evacuation zone to a site to "monitor for future concern." The determination was made based on computer modeling of potential slide paths if the fractured rock at the top of the Beach Road slide area gives way.

"By understanding what areas a variety of simulated landslides could impact if the rock mass associated with the large fracture at the head of the Beach Road slide were to fail, (state geologists were) able to define a line separating sub-areas of reduced and continued concern. (Geologists) believe the area southeast of the modified Beach Road slide boundary is at its normal background (pre-event) hazard level," a Friday, Dec. 18 memo released by the Haines Borough Emergency Operations Center (EOC) reads.

The slide area, and nearby homes that could potentially fall within a slide path if the fractured rock gives way, remain under mandatory evacuation, and could remain that way for many months while more in-depth geologic assessments are conducted, according to state geologists.

"Because (the state) does not have the data or expertise to evaluate the stability of the fractured rock mass, one must consider freeze/thaw activity, heavy rain, snow load, seismicity, high winds shaking trees and other factors as potentially capable of triggering a new slide with no advance warning. A focused assessment by geotechnical experts is needed to fully evaluate the stability of the rock mass and understand the risk going forward," the same memo reads.

Although residents at the southernmost end of Beach Road can return home, access remains limited as the road is still closed and utilities are currently unavailable in the area. The EOC said residents are free to access homes by water. Those who need assistance should contact the EOC.

The Beach Road area has remained under mandatory evacuation since a slope failure on Dec. 2 destroyed homes and killed two residents. On Dec. 12, the area's boundaries were refined to begin where the pavement ends on the town side of the slide, allowing Portage Cove residents to return home.

Although Portage Cove has geology similar to the Beach Road slide area, geologists determined it was a lower risk area because the terrain is less steep and shaped in a way that allows water to drain more quickly.

Based on geologic data collected in recent weeks, on Dec. 12, the EOC downgraded all potential landslide areas of concern to sites to "monitor for future concern" except for the Beach Road landslide area and the site of the 2012 Ripinsky slump.

The site of the Ripinsky slump, a small triangle where Lutak Road and Front Street meet, remains an area of slightly elevated concern due to historical evidence of movement and recently documented movement near Teri Bastable-Podsiki's house. The area isn't under mandatory evacuation, but residents who elect to remain in the area should have a bag packed in case evacuation becomes necessary.

The other previously identified areas of concern, now areas for future monitoring, are: the Ripinsky hillside, stretching from the Cathedral View neighborhood to where Second Avenue hits Young Road; the Highland Estates neighborhood; Portage Cove; a section of Mud Bay Road from the shooting range to Letnikof Cove; the Lutak Road area, which extends to the bridge; and the Lutak Spur area, beyond the bridge.

*This story was updated on Dec. 18 based on an EOC memo released the same day. The version that appears in print was written before Dec. 18.