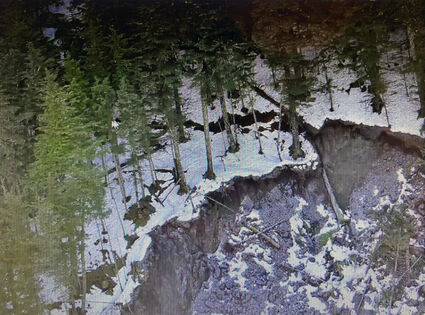 Geoscientists believe a crack extends south of the fracture where the deadly landslide fell last week above Beach Road. It's difficult for scientists to determine the length of the crack because of snow cover.

As geoscientists learn more about the Beach Road slide and the geology of Mount Riley, area residents aren't expecting to reach their homes until summer, and have to make a decision about living below slopes that geoscientists say likely have a history of landslides.

"It's hard to know you're separated from your house, but it's still there," Beach Road resident Steven Villano told the CVN this week. "We could take you there right now and sit on the deck and have a fire. But you don't know whether you'll ever do that again. It's a type of loss I'm not used to."

Villano and his wife Amy Mae moved into their home in September. Mae, a special education teacher for the Juneau Borough School District, and Villano, a museum programs curator contracting with Sealaksa Heritage, both worked remotely. Their property is about 1,000 feet south of the slide.

Beach Roadhouse owners Todd and Amber Winkle said they're experiencing a mix of gratitude that their family is alive and grief and shock over the uncertainty of their home and livelihood. "Will more slides come down?" Amber said of her thought process. "Will you ever be able to return to anything resembling your old life?"

The team of geoscientists updated about 20 Beach Road residents this week with the latest information about the short- and long-term stability of the slopes above their homes. A roughly 50-meter crack extends south from the main fracture. The crack could be longer, but snowpack makes it impossible to know for certain. It's still a high-risk unstable area. Spring snowmelt will likely cause further instabilities in the slide debris and surrounding areas, geoscientists say. LiDAR data suggests the area has a history of landslides, perhaps spanning thousands of years.

The bedrock at the top of Mount Riley, as it has risen to the surface over time, has become highly weathered and fractured. Like a road exposed to the freeze-thaw cycle over time, it breaks down. But unlike roads, the structures can't be repaired. Water finds its way into those fractures and concentrates, building enormous pressure.

"There's a certain amount of rock that I was grabbing that just crumbles in your hand," said Alaska Division of Geologic and Geophysical Surveys (DGGS) geoscientist Mandy Willingham. "It used to be really, really hard rock and, over eons, you can now crumble it in your hand. That's what failed. It wasn't soil, it was actually fractured, weathered bedrock."

University of Oregon professor Josh Roering has been in touch with the local geo team, and has helped a Sitka Geo Task Force map the area's landscape for landslide hazards after a deadly slide in 2015. He said rock is most stable at depth, and as it rises, it becomes exposed to more stress. Between temperature changes, water and freezing events, and biological forces such as roots, microbes and fungi, rocks closer to the surface take a beating.

"The surface is like a torture chamber for rock," Roering said. "Like trying to build a stone wall, if you pour concrete, it's solid. That's not the way mountains are made. You have different types of rock sitting next to different types of rocks and weaknesses between them. That's where water likes to go, and it's all great ingredients to trigger landslides."

It's unclear the extent to which such bedrock makes up the geology of Chilkat Valley mountains, but geo team members say the region's slope structures are highly variable. Some areas are built of marine clays and bedrock, others are giant hills of sand and gravel. Both react differently to heavy rainfall, and slough material that is more or less destructive. GDDS scientists hope to return to Haines this summer or early fall to conduct more LiDAR surveys and get a better sense of where landslide hazards exist.

It will be up to the Haines Borough Emergency Operations Center to make recommendations regarding hazards as scientists identify them, including the long-term risk to Beach Road residents and property owners. For GDDS hydrogeologist Ronald Daanen's part, he would not choose to live on Beach Road.

"My boss asked me if I would buy a house for my children there," Daanen said. "The answer is no."

Mae said they moved to Haines with expectations of making it their home. She said the three months they spent in their house, which they were in the process of buying from her parents Jean Meaux and Gerard Ballanco, felt like it was a place they'd always dreamed of living. 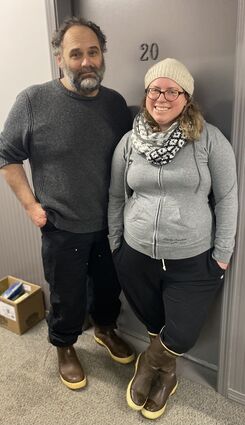 Villano said as the weeks have progressed, he's become an amateur geology buff and is trying to understand the geologic history of his backyard. It's the latest pursuit he's latched onto to try to gain a sense of control in the face of uncertainty.

"You can try to understand what a living form the mountain is," Villano said. "I'm really anxious to hear more from the geologists. We're looking for some sense of will we ever be able to go back, even when we (can) go back in. Can we make a life in that spot?

"It seems unlikely to me," Mae said.

The GDDS team left Monday, and Alaska Department of Transportation engineers are expected to help the borough make short- and long-term mitigation plans for Beach Road along with infrastructure boroughwide.