Search for Larson and Simmons is suspended, friends and family grieve 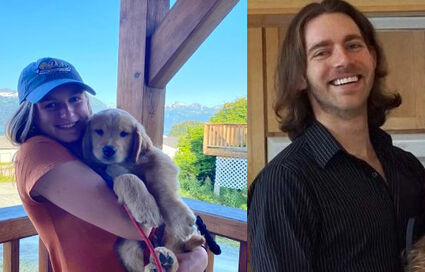 Courtesy of the Simmons and Larson families.

The Alaska State Troopers Monday suspended the search for kindergarten teacher Jenae Larson, 23, and Haines Economic Development Corporation executive director David Simmons, 30, who are believed to have died after a 600-foot-wide landslide destroyed Simmons' home where Larson also lived. As the community continues to provide food and shelter for evacuated residents, repair damaged homes and infrastructure, friends and family are grieving the loss of the young Haines leaders.

Larson lived in the apartment above Simmons' garage. A lifelong Haines resident, she graduated from Haines High School in 2016. She earned her teaching degree from the University of Idaho and moved home, where she worked as a student teacher last spring, and began teaching kindergarten this year.

Larson's aunt, Kristine Robinson, received a text from Larson last spring asking for positive thoughts as she waited to know if she would be hired. When her aunt advised her to envision exactly what she wanted, Larson described a situation in which she would soon find herself only a few months later.

"That'd be teaching in Haines, Alaska, living in my nice, new apartment with Walker and a dog!" Larson replied to her aunt via text message.

Larson helped her mother, Kim Larson, raise a litter of puppies this summer that her family dog, Gracie, bore. She chose one of those puppies to take to her new apartment with Blair on Beach Road. Kim Larson, Jenae's mother, said she's proud that her daughter had achieved her goals at such an early age.

"She was living her dream," Kim Larson said.

Walker Blair and Larson have been a couple since she was a freshman in high school.

"I knew that I liked her and we've been together ever since," Blair said. "She went to college and that was hard, but we ended up making it. We did long distance the entire time through college and then she got to move back here. She definitely always pointed me in the right direction and always made me work harder. I needed that in my life. If I was in it, she was in it."

One of Larson's closest friends from college, Claire Jensen, remembered when Larson got the teaching job.

"She would send me updates about decorating the classroom, getting ready to teach. She loved it, loved the kids she was with, even though this wasn't the way she thought it would happen with COVID-19."

Jensen met Larson during her first year at college and was immediately drawn to her positivity.

"Her and the people she surrounded herself with were people that I wanted to be. She was always laughing, always dancing. She would just shimmy around anytime a song came on or something she liked."

"She came back and assured me they were having a great day," Boron said of Larson, who often babysat her daughters. "On Jenae's first day of teaching kindergarten, they were able to wish her well this year."

Boron said Larson always had a goal in mind and was relentless in pursuing it. When Larson returned home during summer breaks from college, she worked three jobs to earn money.

Many teachers at the school taught Larson. Boron said they were all thrilled to see their former student become a peer. Boron cited Larson's resume where she wrote that the most important thing a person can do in life is to help and serve others.

"That is what the community of Haines has taught me, a respect and appreciation for our surroundings and the importance of doing well for others," Larson's resume reads. "I want my influence to be the reason someone works harder, does better and dreams bigger. That is why I chose to become a teacher."

When David Simmons first moved to town, many knew of him as the guy who wore lederhosen and worked at Alpenglow. He helped hatch a plan with his cousin, Cambria Goodwin, to start what would become the popular wood-fired pizza restaurant that hosted ping pong tournaments that Simmons would invariably win. Goodwin and Simmons traveled together in Italy when the idea took root.

"He said, 'I'll move to Haines. I'll serve.' I didn't believe he'd actually do it," Goodwin said. "Three months later he packed his life up in Europe and moved to Haines and became the legend of David in lederhosen at Alpenglow."

Libby Jacobson, Simmons' partner, first met Simmons at the pizza restaurant in the summer of 2019. They spent several weeks together before taking separate trips, Simmons to Russia and Jacobson to Nepal and India.

"We stayed connected on our trip and talked every day and realized how often we missed each other," Jacobson said. "I flew back to L.A. and he picked me up and we spent everyday together traveling."

While working at the Alpenglow, he started a Haines-to-Whitehorse shuttle service called Hinterland Express. "He did crazy shuttle runs," Goodwin said. "He'd drive to Whitehorse early in the morning and then work a shift at Alpenglow. He wouldn't stop. He was running off David energy."

When the pandemic began and the border closed, Simmons couldn't operate the shuttle service. He then applied at Olerud's Market Center. A former Fulbright scholar with a masters of science in international business studies, Simmons was quickly hired by Tyler Swinton. On his own initiative, Simmons not only reorganized the freezer department and reformulated the ordering process for increased efficiency, he rearranged the pastry display and doubled muffin sales, Swinton said.

"He always had a joke going because he had OCD, he'd sync up his watch with the time clock and he would always clock in at exactly 9 a.m. and clock out at exactly 5 p.m.," Swinton said. "It was two or three months before he (was late) and that was because he stepped on a nail at his house. And even then, he was only two minutes late."

Jacobson said he brought that same creativity and passion to everything in his life, and was dedicated to making Haines a better place to live. Of the nearly 80 countries Simmons had traveled to, Haines was the place Simmons wanted to call home. "He would always say, 'Haines is the best place on Earth," Jacobson said. "All he wanted to do was see Haines thrive and get to know the people here."

Jacobson said Simmons valued living in the present and that he brought everything he had to the tasks before him. The couple quickly grew closer after their travels and they moved in together at their Beach Road home on April 7 this year. Simmons' grandfather was an avid model train car collector. Simmons helped his grandfather sell the trains on Ebay, one for as much as $700. After splitting the train sale proceeds with his grandfather, Simmons used his share for a down payment on his house.

Jacobson and Simmons spent much of their time improving their home, and making plans to purchase surrounding property to "preserve Full Moon Cove with the forest around it."

When they weren't working and envisioning their dreams for the property, Jacobson said they spent time together sitting on their couch, talking among lit candles.

"I was talking to him that day and he said 'You're the best thing that ever happened to me.' He made it easy to say it back," Jacobson said. "The time we got to spend together, every day was so beautiful. We would just sit on our couch and talk for hours every evening. We'd go to sleep and say, 'I can't wait until tomorrow' because we had so much fun together and we had so much more to do every day."

Jacobson was in Seattle when the landslide fell on her and Simmons' home. She returned to Haines on the ferry and saw the mass of mud and debris that destroyed the home the couple moved into last April.

"I feel singled out," Jacobson said. "The width of the slide was disgusting. It took our home and it took the home below us that we wanted to buy. It took our dreams," Jacobson said. "On my ferry ride (home), just looking at all the mountains and not seeing anything that looks like this, I thought, 'Why my house and why my David? I will never know."

Simmons' father, Randall Simmons told a gathering of search and rescue volunteers Tuesday that his son had never been happier in his life after finding a home in Haines. "Libby and I both know that he died with a smile on his face because he never stopped smiling," Randall Simmons said. "We both talked to him within hours of his death, and he was just David being David."