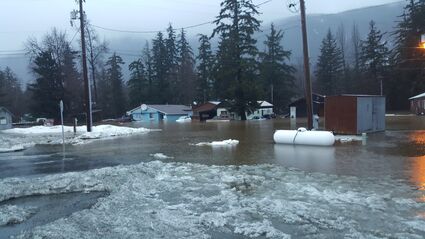 Haines received a record-setting 5.49 inches of rain in a 24-hour window on Dec. 1. The torrential downpour left portions of town underwater and triggered a lethal landslide on Dec. 2. Photo courtesy of Liz Landes.

On Dec. 5, Gov. Mike Dunleavy signed a disaster declaration for Southeast Alaska after flooding and landslides damaged roads, public facilities and private property from Ketchikan to Haines. The disaster declaration will make state assistance available for public infrastructure repairs and is the first step in requesting federal assistance.

At least 12 communities have reported damage from the storm that brought heavy rainfall to the region between Nov. 30 and Dec. 2. The damage in Haines, which received more than 10 inches of rain in two days, is by far the most widespread, according to Alaska Division of Homeland Security and Emergency Management public information officer Jeremy Zidek.

"We've been working for the last several days just trying to gain access to different neighborhoods and repair streets enough that hopefully they will survive (the winter)," Coffland said. "There's lots and lots of damage all over town to different streets, and significant damage particularly on Young Road and Piedad and Cathedral View."

In addition to roads, the storm damaged water, sewer and power lines. The Young Road neighborhood was told to boil water after a water main burst. The Lutak neighborhood was left without power or water for several days.

"The damage is really extensive. Early on, we were working pretty much around the clock," Coffland said. "We've put in hundreds if not thousands of hours. Besides contractors and our own crews, we've had many, many volunteers helping us out, cleaning out culvert pipes, shoveling out fire hydrants, plowing and a lot of help cleaning up down on the beach."

In the past week, the borough has spent roughly $200,000 on temporary contractor support for facility stabilization. By the end of Friday, the borough hopes to have temporary road repairs complete, Emergency Operations Center (EOC) incident commander Carolann Wooton said at a Tuesday assembly meeting.

As of Tuesday, the borough began transitioning into planning for more long-term repairs.

"We've just about got it to where we can get through the winter. I'm hopeful the engineering can get done over the winter, and by spring, we can be ready to start doing some construction," Coffland said. He estimates it will take at least a year to rebuild fully.

Coffland said the short-term repairs are functional but aren't designed to withstand another weather event like last week's. "The public needs to be aware that the fixes we've done so far are temporary. If we get another storm like this, they're likely to wash out again," he said.

Coffland said the borough plans to design permanent repairs so they can handle bigger storms, but the repairs will cost money that, at present, the borough doesn't have.

"It's really early on, but I think FEMA will be involved at some point. We're certainly going to be looking for funding to help with projects," Coffland said.

"(The state's public assistance program) pays to rebuild roads, bridges and critical infrastructure. It can be used for reimbursing emergency response costs. That's the program that's going to be activated initially. If additional programs are activated, we'll need to go in and collect data to make that evaluation," Zidek said.

For FEMA to get involved in the rebuilding effort, it requires a presidential disaster declaration. The state's disaster declaration initiated a request for this assistance. Zidek said it's likely some form of federal funding will become available to assist the region, but it will take time to assess damage, a requisite step.

"We've contacted thirty communities in the region. Twelve have reported damage (ranging from a foot bridge washing out to the widespread damage in Haines)," Zidek said. "We'll have to get out there and work with those communities and determine what the level of damage is so we have data to back up any request."

According to FEMA's website, the information collected must demonstrate that the disaster is severe enough that "effective response is beyond the capabilities of the state and the affected local governments."

Federal assistance could take many forms, depending on what the region's needs are determined to be, Zidek said. Programs range from financial support for public infrastructure projects to FEMA grants for individuals to loans from the Small Business Administration (SBA). The state also has an individual assistance program that has not yet been activated. In the wake of the 2018 Southcentral earthquake, individual and public assistance was made available at both the state and federal level, as well as SBA loans.

"We need more damage reports from communities to see if we meet the threshold for individual assistance. That's where reporting to the borough is key," Zidek said.

Zidek said homeowners with flood or landslide damage should document the extent of the damage before they begin working to rebuild, and they should start rebuilding as soon as possible, rather than waiting for a determination about individual assistance, which may or may not come through.

Flood insurance is uncommon in Haines and throughout Southeast.

In recent days, there has been a surge of interest in purchasing flood insurance, with several residents making inquiries to the State Farm office in Juneau. There's a 30-day waiting period once a homeowner applies, so taking out a policy now won't help cover damage from the current weather event.

It could be several months before residents know what kind of individual assistance will be made available. In the case of the Southcentral earthquake, the event occurred on Nov. 30, 2018, and the presidential disaster declaration wasn't approved until Jan. 31, 2019.

To assist with the damage assessment, residents can report flood and landslide damage to the borough at https://www.hainesalaska.gov/report-flood-damage.