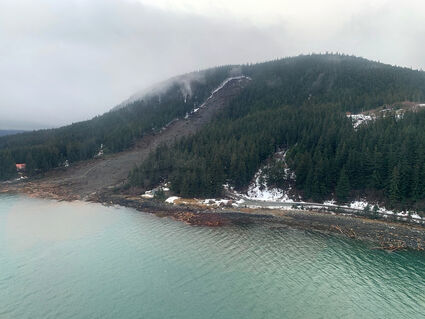 On Dec. 2, a 600-foot landslide, triggered by heavy rainfall in the days preceding, destroyed the home of David Simmons, leaving Simmons and his tenant, Jenae Larson missing. The Alaska State Troopers ended search efforts on Monday due to ongoing slope instability in the area, which prevented an on-foot search of the debris field.

The skies cleared Wednesday after a week of rain that kept instabilities in the landscape active and a ground search for missing residents on standby. After days marked by uncertainty, loss and grief, some of the roughly 50 displaced families moved back home. The disaster, caused by record-setting rainfall that began last Tuesday, was precipitated by a relatively small, single lane debris flow that was quickly cleared by state highway workers.

On Tuesday, Dec. 1, Haines state transportation foreman Matt Boron's crews cleared the small landslide at 6 Mile Haines Highway. The debris blocked a single lane of traffic. Boron said his biggest concern was that slides didn't come down at 19 and 23 Mile, areas notorious for slides due to melting permafrost.

"Knock on wood, so far, we haven't had that kind of action," Boron told the CVN on the morning of Dec. 1. "Right now, it's just a sloppy mess."

"Rain is going to be the main story for a long time," NOAA forecaster Caleb Cravens said Tuesday afternoon. "The potential for landslides is there."

By Wednesday, Dec. 2, that potential became a reality.

"We're just trying to triage," Boron said that morning. "I just have no idea right now how widespread the damage is. It's pretty overwhelming right now is about all I can say. I don't have time to talk."

Slides fell across the Haines Highway, Piedad Road, Cathedral Road and Soap Suds Alley. Young Road caved in. Dozens of slides fell across Lutak cutting off access to town for two days and power to 46 homes for five days. Several homes on the Lutak Spur were destroyed and or badly damaged. Flooding displaced dozens of residents across town.

Lucinda Boyce witnessed the slide from across Portage Cove in a home below the American Legion. "We heard it and looked up and we saw what was clearly a slide hitting the water, with a cloud of spray and debris," Boyce said. "It was terrifying. There was a wave that made it across Portage Cove and we watched it break on the breakwater and the new Canal Marine building."

Haines Borough public works employee Walker Blair, Larson's partner since high school, had been on the job since the early morning hours of Wednesday morning working to divert water on flooded roads and creeks, including the creek near his Beach Road apartment. Exhausted and in need of a break, he called Larson, and said he was heading home soon and asked her to put on a pot of coffee. Neighbor Sally Garton told Blair a flooded creek was approaching her house.

"I made the decision to not go inside and get coffee," Blair said. "I went down the road and the creek had gone into somebody's driveway and was threatening a tree that was overhanging his house so I dug that out and diverted the stream."

Afterwards, his boss Will Hickman called Blair and told him a slide fell on what he thought was a section of Beach Road further south from his house. Blair drove toward home in his loader with plans to evacuate.

"It wasn't more than eight minutes after Will called me that I got to the slide and there were downed power lines and a stack of trees three feet high," Blair said. "I climbed up it and looked for the house and it was gone."

He stumbled across the slide as rocks continued to tumble down the slope, and what he described as a massive stream of water coming off the top of the mountain. He called 911, and then his mom to tell her he was alive.

A massive search and rescue effort ensued bringing to Haines the U.S. Coast Guard, the Alaska National Guard, Alaska State Troopers, SEADOGS, Capital City Fire Rescue, Juneau Mountain Rescue, the Salvation Army, the Red Cross and more than 100 local volunteers. Beach Road residents trapped on the other side of the slide were evacuated from beaches below their homes.

Mandatory evacuations in several areas left more than 50 families displaced. The evacuees flooded into the Captain's Choice Motel, the Aspen and the Eagle's Nest. The dormant Hotel Halsingland reopened to accommodate those who had to flee their homes. The Red Cross arrived to provide shelter support and bolster local counseling services. Donations including clothes, toiletry items, food and money flowed into Haines from across the state.

A record-setting 10 inches of rain fell on Haines in two days, what NOAA forecasters call a 200-year storm. The Haines Borough Emergency Operations Center organized and, along with Gov. Michael Dunleavy issued a disaster declaration.

Rain continued and prevented ground search efforts, frustrating the hundreds of volunteers at the fire hall who stood by conducting drills and waiting. Foul weather prevented state geoscientists from traveling to Haines, but they eventually arrived by ferry and began monitoring water pressure in the ground. After observing what they could in the short time they had, the scientists reported continued instabilities across the landscape as the public tried to wrap their minds around the implications of what was happening around and beneath them.

"It will take time before the soils are back to the way they used to be and freezing is not going to increase that speed," Alaska Department of Natural Resources geohydrologist Ronald Daanen said during a community update at the American Legion. "All exposed areas that have no vegetation because of landslide events now likely will have more instabilities during spring snow melt."

State trooper ground search efforts were suspended Sunday as the debris field transformed into a slurry of waist-deep mud.

The state scientists told residents they needed their help in making observations of the landscape. Haines Police and volunteers monitored the valley, including the Ripinsky area, for signs that water pressure would overwhelm slopes. On Saturday, Dec. 5, Mayor Douglas Olerud told residents living north of Main Street between Piedad Road and Picture Point to pack their bags and be ready for an evacuation notice. That notice continued through Tuesday evening for those living 200 feet above sea level or higher.

On Tuesday the rain let up and patches of blue sky appeared for the first time in a week. Helicopters buzzed through the sky carrying geoscientists who were finally able to make more substantial observations from the air.

While the threat level to some areas diminished, others were declared increasingly unstable. A crack in the pavement along Lutak Road was a sign the land was shifting, and Teri Bastable-Podsiki evacuated her home with help from dozens of volunteers who packed her possessions into a U-Haul truck.

Geoscientists remain in Haines to monitor the landscape and water pressure. Alaska Department of Natural Resource scientists elsewhere in the state are analyzing the hundreds of observations submitted by their peers, and Haines residents who are becoming increasingly familiar with the signs and language of landslides.

Amid the din of disaster, the public heard a new mantra from the Mayor at the end of his community updates and began appearing on social media posts and profile pictures: Haines Strong. Public works crews are rebuilding roads and infrastructure, what Fullerton described as "Band-Aid" fixes until the borough can take a full account of the devastation, and secure much needed federal disaster relief funding.

"Little" Jack Smith worked for 36 hours, interrupted only by refueling heavy equipment, to divert relentless flood waters and mud from overwhelming his home on Piedad Road. His work was successful, although his truck was completely buried in mud and debris.

Residents continue to help neighbors tear out flooded carpets and flooring and discard ruined possessions. The Grubb family, who live on the Lutak Spur Road, rebuilt a wall that was smashed in by silt and sand.

As of Wednesday morning, more than $345,000 in financial donations from around the world poured into fundraising efforts for the Simmons and Larson families, and other disaster relief efforts.

"I made some money on the side teaching this fall and I could not see it put to better use," wrote a family from Switzerland. "Stay strong."

On Tuesday, Olerud addressed the Larson and Simmons families, along with dozens of local volunteers who spent the last week waiting to find their missing community members.

"Jenae and David are two amazing individuals and we should all strive to be like them," Olerud said with tears streaming down his face. "They're shining lights that make everybody around them better and happier and we need more of that, not just today, but as we move forward. It's going to be a long process."

The reports, stories and images in this week's issue cover the preceding accounts in more depth. Most of these stories were posted online earlier in the week, and have been updated as things have changed. They offer just a glimpse of the wreckage brought by this disaster, and the community's tireless response.

The CVN, which traditionally closes for two weeks during the holiday season, will remain open. While we hope to take a break at some point this winter, we'll be here to cover as best we can this process as it unfolds and for as long as is required.