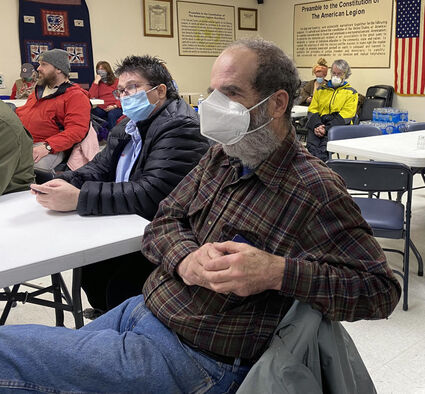 Some Beach Road residents apparently made attempts to reach their homes Wednesday morning as observers witnessed a skiff traveling back and forth from the beach below the road where a massive landslide left two residents missing.

"I have heard reports and I am very much discouraging that," interim borough manager Alekka Fullerton said during a press briefing Wednesday afternoon. "It's really going to be a shame if they need to be rescued. We are asking people to stay out of that area. It is absolutely not safe."

Beach Road residents made requests during a Dec. 7 meeting to travel to their homes to winterize houses, dispose of food and bear attractants and retrieve valuables before cold weather sets in. Geoscientists reported that the area remained unstable and that more landslides could occur between the Chilkoot Indian Association dock and the Battery Point trailhead. The area remains under mandatory evacuation. Scientists said it's unsafe to travel the area by foot until four days after it stops raining.

"We were asked to leave on very short notice for very good reason. We understand that," Beach Road resident Phil Pink said. "You are talking about fifteen families, some whose livelihoods are at risk right now. Most of them, not all, but most of them would like some sort of arrangement made so they can turn their water off and drain their pipes and pull the junk out of their refrigerators so that this week, when it gets cold they don't lose their houses or suffer terrible damage."

He asked if some accommodation could be made in a methodical, planned way so that residents don't go in by themselves without support.

The meeting became tense for a brief time during the discussion.

"Your question is this: what is your life and your property worth when you get stuck and me and him go in to rescue you," said resident Jim Hayes. "Because we're going to do it."

Pink said he wouldn't go home because he didn't want to put anyone else at risk.

Olerud reinforced the safety concerns cited by a team of state hydrogeologists and geoscientists who have been making observations and collecting data along the entire Beach Road landscape.

"You guys might not believe us, but we have looked at this many, many ways," Olerud said. "We've talked to them numerous times a day about the options to get people into their houses. Unfortunately, the answer every time from the professionals that would be assisting with that is: 'We are not going into that place."

Haines Borough Emergency Operations Center (EOC) spokesperson Liz Cornejo said Dec. 7 that as more data is collected in the area, the more confidence observers have that the area is unsafe.

"For several areas (in Haines) we're telling you we don't have the data to make a decision. With the (Beach Road) slide area, the more data we get, the more we're certain it's an unstable area to go into," Cornejo said.

The area of concern was refined Tuesday night, but the large majority of the slopes remained unstable, according to geoscientists and the EOC issued a mandatory evacuation order to residents on upper Mount Riley Road.

Pink asked if the EOC could assist the neighborhood with stationing a generator at the Battery Point trailhead so that power could be quickly established once access was again approved. Olerud said he would take the request to the EOC. Olerud told the CVN Wednesday that they have not yet found a viable way to grant the request.

At a Tuesday press briefing, Olerud asked residents to refrain from judging or criticizing others, including the Beach Road residents who want to save their homes and property. He asked people not to diminish someone else's loss.

"They want to protect their assets and resources. That's extremely important to them. While we might disagree with their decision to want to do that, I think we have to acknowledge the reasons why they want to do that," Olerud said. "We're all in a very difficult situation and we're only going to get through this by supporting each other, not tearing into each other."

Olerud continued to urge residents to stay away from unstable, dangerous areas and not put others at risk who might have to save them.