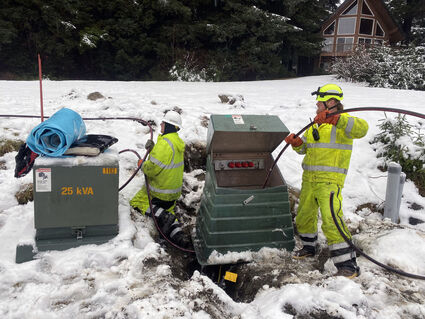 AP&T crews worked Saturday and Sunday to restore power to 46 Lutak Road homes. Crews had to install temporary power lines along the road where dozens of landslides fell just days before. It was unclear to them at the time whether the slopes above them would continue to slide.

AP&T crews restored power at about 3 p.m. Sunday to the 46 homes toward the end of Lutak Road that have been without electricity since late Tuesday night. AP&T operations manager Lance Caldwell said workers temporarily routed cables along the side of the road and the lines will be susceptible to future runoff.

"Unfortunately, it will be a temporary solution and hopefully, if weather permits, it will last a while," Caldwell said. "We had a meeting this morning with some Beach Road residents and (I'm) afraid there is nothing that can be done for them for a while yet."

Beach Road remained a hazard Sunday as the landslide debris was too saturated to safely access on foot.

Geoscientists also appraised conditions along Lutak Road Sunday. Mayor Douglas Olerud said although scientists were still compiling information, "they gave no recommendations to close the road, but they want more time to look at it. Right now the road is open."

Experts continued to monitor conditions as the skies cleared Tuesday and Wednesday, and designated the Lutak zone as "be prepared" due to observed slides in the area. The category means residents should be prepared to evacuate in the event conditions worsen and an evacuation order is declared.

While most Lutak residents evacuated to town Thursday and Friday after road workers cleared a path through at least a dozen landslides, a few remained and went without power and running water. On Sunday morning, the area was quiet other than the sound of rain trickling into buckets for drinking water, the low roar of generators and a lone resident on the spur road pounding a hammer as he rebuilt a wall that was destroyed by a landslide.

Residents were largely unaware of the Beach Road disaster and flooding that damaged homes in town.

"I didn't know they had a slide," Dave Disbrow said. He found out days later.

Disbrow lives near 8 Mile Lutak Road with his wife in a home built partially from a converted bus. He drove to town for supplies once the road was cleared. On Thursday, after workers cleared a single lane through the last slide around 7 Mile, Sean Bryant traveled by dirt bike to notify area residents that geologists were concerned that a tsunami could be triggered from debris or rock falling away from the mountains across the inlet.

"Some guy came here and said, 'Hey, there might be a tsunami, there might be an evacuation.' I said 'you gotta be joking. I'm not going anywhere,'" Disbrow said. "It's Alaska. You know, what the heck?"

Vance and Jamie Grubb live on the Lutak spur road where slides caused property damage to at least three homes. The couple woke up around 4:30 a.m. Wednesday morning to the sound of trees crashing onto their roof and massive amounts of silt and sand flowing into their bedroom. They've been moving debris and repairing a wall that was destroyed after slide debris broke through

"We heard this huge sound and Vance said, 'I think the roof came off the house.' It was still dark but you could feel the cold air and you could see that sand coming in. By the time we made it to our bedroom door the sand was already there and on top of our bed."

Vance moved the debris with his backhoe for two days and tried to keep the material away from their generator sheds.

"He came up a couple hours later and said, 'I'm not making any headway, it just keeps coming.' Finally it stopped sliding so much," Julie Vance said. "We moved probably 10 tons of sand out of our house."

Once it got lighter outside, they saw the damage to their next-door neighbor's home. Slides above Steve Virgin's home pummeled his house into the ground.

"We're so grateful nobody was in it," Julie said. "We looked at that and thought, 'Well our stuff is not so bad after all.'"

On Sunday, the Grubbs were nearly finished putting up a new wall and plan to install insulation. They still need to clear loose trees that remain hazards to their property.

They are one of the remaining families who stayed on the spur road. They've been using their hot tub water to flush their toilet and made a trip to town for eggs and other supplies. Generators are providing power.

"Everybody else is gone," Vance said. "It's pretty quiet when you go down the road."

Sally and Tom McGuire live at the mouth of the Chilkoot River. Sally strung up a string of LED lights for her chickens and said she couldn't evacuate because she didn't want to leave her animals behind.

They have buckets set up to catch rain pouring off their roof. "We've got all the running water you could ever want right outside the door," Sally said. 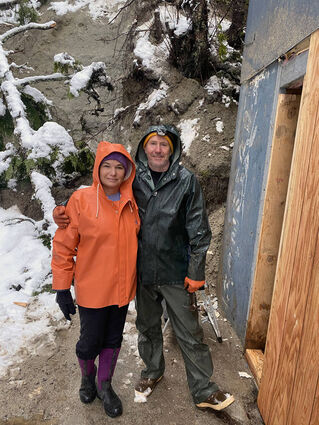 Vance and Jamie Grubb awoke Wednesday morning to cascades of silt and sand filling up their bedroom. The debris destroyed a wall in their home and tore down several trees. Vance Grubb spent days with his loader moving material. A Southeast Roadbuilders loader assisted Grubb with additional removal after workers gained access two days after the slides.

Tom said he wasn't too concerned about a tsunami. "That's a problem every day of every year if you had a seismic event," Tom said. "If you're worried about that you should live elsewhere."

Judy and Mike Durand live next to a creek that undercut the house they live in during floods 15 years ago. Mike watched broken trees and rocks pile in the creek next to his house as waters swelled. The debris forced the deluge to cut a new channel closer to his house.

"All this debris came and the water had nowhere to go," Mike said as he monitored the creek. Sunday's rain kept water levels high, but his house is safe.

Judy said the roar of the creek kept their cat skittish and it, like them, had trouble sleeping.

"We don't sleep as much," Judy said. "We're up a lot watching the creek"

Judy walks Lutak road twice a day, every day. She's maintained her habit despite the rain and her cat has calmed down.

"My computer still had battery, so I played solitaire," Judy said.