A 200-year weather event could happen in any given year, according to NOAA 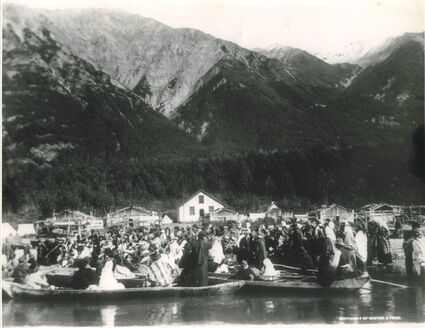 The historic Tlingit village of Kaatx̲'awultú (often referred to as "Kluktoo") was located at what is now 19 Mile Haines Highway. The village was taken out by a landslide in the 1890s. The Chilkat Valley, like the rest of Southeast Alaska, is prime landslide territory because of its steep slopes and rainy weather. Photo courtesy of the Haines Sheldon Museum.

The 200-year weather event that flooded Haines and triggered a lethal landslide on Dec. 2 has the exact same probability of occurring next year, according to National Oceanic and Atmospheric Administration (NOAA) forecasters. And a changing climate could mean the event is even more likely to occur in future years.

More than 10 inches of rain fell on the Chilkat Valley on Dec. 1 through Dec. 2, an event NOAA senior forecaster Nicole Ferrin described as a "200-year event" at a briefing for residents on Sunday.

"A 200-year event is extremely rare, which is why we've never seen slides at 27 Mile and all these weird places," Ferrin said.

But a 200-year event isn't, as the name suggests, an event that's likely to happen only once every 200 years. It's an event that has around a .5% chance of occurring at any given time, said NOAA senior service hydrologist Aaron Jacobs, who was also at the briefing.

A coin flip is an apt analogy, Jacobs said. A quarter, when flipped, has a 50% chance of landing heads, every time-a "two-coin flip event." But a coin landing heads on a given flip has no impact on the probability that the next flip will also be heads-it's still 50%.

Jacobs said the determination that the Haines storm was a 200-year event was based on weather records for the area, but the climate in Southeast Alaska is changing.

"The analysis is based on past information and does not take into account the changing climate," Jacobs said. "Overall a warmer environment can hold more water and could make extreme events more likely."

As the Southeast climate trends toward warmer, rainier winters, it increases the chance of future landslides, according to state geologists.

"Weather is a product of the climate, which seems to be getting wetter and warmer. These sorts of slope failure events are strongly controlled by weather. Rain upon rain upon rain seems to be happening more," Engineering Geology Section chief for the Alaska Division of Geological & Geophysical Surveys (DGGS) De Anne Stevens said.

Mayor Douglas Olerud told the CVN future infrastructure planning needs to take these trends into account. "It has to be part of the discussion," Olerud said. "That's why there's the need to make sure we rebuild to handle it, because if those projections are (accurate), and these events are closer together, how do we make sure we protect ourselves?"

He said existing infrastructure that went unscathed also needs to be evaluated to ensure it can withstand extreme weather events.

Southeast is an area with a history of flooding and landslides due to its steep peaks and rainforest climate. In 2015, a landslide killed three people in Sitka. In Haines, storms have caused flooding and landslides with records dating back to the late 1800s. The historic Tlingit village of Kaatx̲'awultú (often referred to as "Kluktoo"), located at what is now 19 Mile Haines Highway, was taken out by a slide in the 1890s. In recent years, heavy rains have caused damage to public and private property in 1998, 2005, 2012 and 2014.

Precipitation continued in the Chilkat Valley in the days following the record-breaking storm. A flash flood watch remained in effect through Tuesday afternoon.