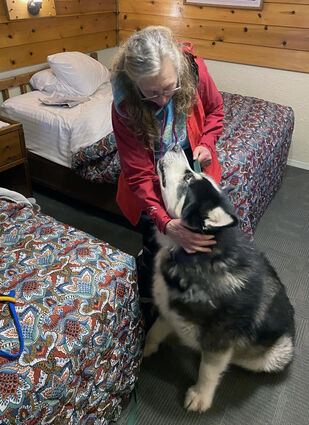 Dawn Woodard and her malamute Gooch relocated to the Captain's Choice Motel after the 75-year-old woman led a Beach Road rescue effort for her dog.

Although residents were ordered to stay away from Beach Road after Wednesday's massive landslide, Dawn Woodard, 75, was determined to rescue her 160-pound malamute Gooch.

"Thursday night some people had called and said 'Hey, can we rally a retrieval of Gooch?' Otherwise the owners are going to hike over (Mount) Riley and come down Battery Point to try to rescue him. We didn't think that was the best thing for those folks to be doing," said search and rescue volunteer Greg Schlacter.

Gooch had been stuck at home for nearly two days after Dawn and her husband Art, 76, were ordered to evacuate after the Wednesday slide. Art said his wife was walking the dog when the slide occurred. They scrounged clothes and medication and left a large pile of food and water for Gooch.

"(Gooch) was out there for two days all alone," Art said. "I felt so bad. I was worried sick (Thursday) night."

"They didn't want to take me," Dawn Woodard said. "I'm a woman, one, and two, I'm over the hill. I was at the police station at quarter to seven Friday morning. I said, 'I really do need to get out there and get Gooch.'"

Schlacter, like many Battery Point hikers, is familiar with Dawn and Gooch who make regular trips up and down the trail. He lobbied for Dawn to come along.

"The dog is massive and scared of its own tail and kind of a goofball. Having known the dog, I said 'I think Dawn needs to come with us," Schlacter said. "For a 75-year-old woman, she is super spry and able. I know she's not going to be a liability. In fact she's probably going to be an asset."

When the boat landed, Russell, Schlacter and Dawn made it up to the road and first rescued two cats at a neighbor's house. Schlacter was the lookout and made sure the slope was stable.

"It must have taken 30 plus minutes for Travis and Dawn to rustle up the cats," Schlacter said. "It was not the easiest thing."

After snatching the cats, the rescuers then approached the Woodard's home where Dawn and Gooch were finally reunited.

"You know what? He didn't poop from what I could see. Can you believe it?" Dawn said Friday while recounting the story of the rescue at the American Legion hall. "He was ecstatic to see me. He really needed to go potty. Once he greeted me, he was out the door."

Gooch was skittish when they approached the boat, so they lured him up a ramp into the vessel with beef jerky."

"He was a quarter of the way up. Dawn had his hind quarters," Schlacter said. "I just kept throwing beef jerky into the boat. We were shouting 'More beef jerky! More beef jerky!' It was a good, light moment. It was good to get Gooch back in town."

Gooch is now staying with the Woodards' in their hotel room at Captain's Choice.

Art described his wife as a hero, and praised Haines residents for coming together during a time of crisis.

"I sure love this community," Art Woodard said. "Two weeks ago we were all arguing about which way the government should go and so forth. Now we're all pulling together in the same direction."