Volunteers turnout to assist with search for Simmons and Larson 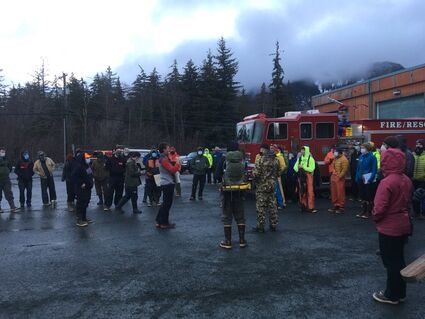 "I'm here because I feel called to be here. I'm currently a survivor, as we all are, and if I can do something to be part of a bigger picture and save Haines, that's my part," said volunteer Hannah Clark who grew up snowboarding in Wasilla and has worked as a guide in Skagway. On Dec. 2, Mayor Douglas Olerud put out a call asking residents with wilderness experience to assist with the search and rescue effort.

"So far, I've lost a friend (in the mudslide) and that's really hard and that brings it so close to home because we're family. The two-thousand people here are truly family," Clark said.

"We're in a real information-sparse environment. We're here early to be ready, but we're waiting on more information, daylight and for geologists to do a slope stability assessment," Haines Fire Department Search and Rescue advisor Dick Rice said at a morning volunteer briefing. "The next few days will be intense, but this is a long-term event for Haines. We're looking at weeks and months as we deal with the ramifications from this event."

In a Dec. 3 press release, Alaska State Troopers confirmed that two people from the Beach Road mudslide, Simmons and Larson, were still missing. All others had been located and were safe.

"This is a worst-case scenario," Rice said of those missing. The slide area is large and no one had a "last sighting" of the missing individuals, he said.

"This is still a Search and Rescue operation," interim borough manager and Emergency Operations Center (EOC) public information officer Alekka Fullerton said when asked whether there remains hope that those missing are alive.

"There's a lot of hurry up and wait on an incident like this," EOC operations section chief Sean Gaffney said to volunteers Thursday morning.

While the four volunteer teams waited at the Public Safety Building, a helicopter did a flyover to assess the stability of the Beach Road area. A select number of rescuers entered areas deemed safe with dogs.

"It's huge, just the fact that the governor declared a state of disaster. That's huge. That's very atypical," JMR operations section chief Jackie Ebert said. "I think it's that severe of an incident. So many in Haines are affected both by the slide and other flooding issues. Residents are displaced, access points are cut off... And then to add COVID in the mix."

Ebert said COVID-19 protocol is being observed by those entering Haines to assist with the disaster including wearing personal protective equipment and getting rapid tested prior to, or upon, entering the community.

"(Thursday) was the first day folks were able to get up there and do terrain analysis," Ebert said. "I can't speak to their findings. It is being thoroughly analyzed and discussed."

Around 3 p.m. Thursday, Rice said manned search and rescue operations for the day had concluded. He said there had been a "development from a dog in a boat. We were going to cut two (volunteer) teams loose and keep two here, but in light of recent developments, we can cut (all) four teams loose." He said he couldn't provide additional details because the information was "nebulous."

Rice asked available volunteers to return on Friday at 7:30 a.m. He said dog teams would remain the preferred search method.

Ebert said helicopter-based searching will continue Friday as well. "I know that the plan is to continue helicopter support as available, but the weather is supposed to turn. There's significant rain in the forecast and wind picking back up," she said.

As volunteers packed up for the day on Thursday, Gaffney commended their patience and dedication.

"We have the (state) trooper responsible for search and rescue statewide upstairs, and he said that in decades of doing this, he has never seen anything like this, and I said, 'Welcome to Haines.' You've done us proud," Gaffney said.

Landslide and flood dangers remain throughout the Haines Borough. Piedad and Cathedral neighborhood residents were told to evacuate Dec. 3 around 9 p.m.

Assistance is available for residents displaced from homes at the American Legion in downtown Haines and at New Hope Church in Mosquito Lake. The borough continues to ask those who don't need to travel to remain off the roads to allow emergency crews to work.