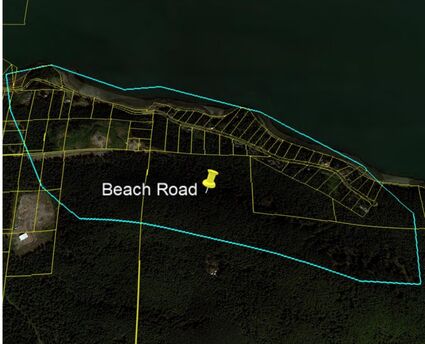 Houses on upper Mount Riley Road were placed under mandatory evacuation Tuesday based on geoscience data collected during the past few days. The Emergency Operations Center will continue to reassess landslide risk in areas throughout the Haines Borough in the coming days. Photo courtesy of Tuesday EOC geoscience presentation.

Houses on upper Mount Riley Road are now under mandatory evacuation. On Tuesday, the Haines Borough Emergency Operations Center (EOC) refined landslide areas of concern based on data collected by state geologists and crowdsourced from residents over the past few days.

In an area designated "be prepared," residents should pack a bag and sleeping materials so that if evacuation becomes necessary, it can be done quickly and efficiently. Evacuation is voluntary under this designation. Residents should monitor their surroundings for potential changes in runoff or land movement that could indicate increased slope instability. Areas in this category include: the Ripinski area, stretching from the Cathedral View neighborhood to where 2nd Avenue hits Young Road; the Mud Bay Road area, a section of the road right before the cannery; the Lutak Road area, which extends to the bridge; and the Lutak Spur area, beyond the bridge.

"Elevated alert" has the same protocol as "be prepared," but the risk is higher. Areas on elevated alert will receive increased attention from geologists. The only area in this category is the Highland-Picture Point area, the site of the 2012 slump triggered by heavy rains.

"Evacuate," the highest level of risk, means the area is unsafe for occupancy and closed until further notice. The only area in this category is the Beach Road area, which now includes houses on upper Mount Riley Road and the sledding hill.

"We have defined the western boundary (of the Beach Road area) a bit more clearly for some people. It is including some homes now on upper Mount Riley Road. These are homes we would like to see evacuated tonight," Cornejo said on Tuesday. The new boundary is based on assessed potential for additional slides in the area, she said.

All homes on the far side of the Beach Road landslide remain under mandatory evacuation.

Prior to the Tuesday night assembly meeting, neighborhoods west of Piedad Road on the Mount Ripinski hillside were under mandatory evacuation, in addition to Beach Road.

Cornejo said evacuated Cathedral View residents can return to homes beginning Wednesday during daylight hours if they choose. The Ripinski area now has a defined southern border at roughly the Moose Lane-Mathias Drive elevation on the slope. Residences below this boundary don't fall within the "be prepared" zone.

The area along Mud Bay Road has been added to the list of be prepared zones because it has similar geology to the Beach Road area, Cornejo said.

Lutak Road and Lutak Spur are in the be prepared category due to slides observed in the area.

"Lutak Spur area across the bridge, there's moderate concern. Landslides have been hitting homes, but they are localized," Cornejo said. "There could be additional slides in the area." She said it will take weeks, not days for the risk to decrease in this area because it has a different soil composition than other areas.

The Highland-Picture Point area, where the 2012 slump occurred, is categorized as elevated alert, unlike the rest of the neighborhoods on the Mount Ripinski slope.

"That's an area that's seen historic activity," Cornejo said. She said although Skyline residents aren't included in the area, they should be aware that access to their neighborhood could be cut off in the event of a slide in the "slump" zone.

Right now geologists' confidence in the levels of risk assessment ranges from low to moderate confidence, depending on the area. Area boundaries and risk levels could change as more information becomes available and will be reassessed daily, Cornejo said. Until Tuesday, weather had made it difficult to collect aerial images, an important tool geologists use for assessing slope stability.

"These zones were determined by groundwork by the geoscientists and by reports of damage and information coming in from the public-lots of calls to dispatch and here at the EOC and photos being sent in, " Cornejo said. "With more work, these boundaries may change slightly, and we may end up defining new areas, but this is the best we can do at this time with the information that we have and we're trying to just share everything we can with you at this time so that you can make good decisions for yourself."

Residents are encouraged to report any landslide signs they see using the Mountain Hub app, or by contacting the EOC at eoc@haines.ak.us or 766-6445. Information about the app can be found at https://www.hainesalaska.gov/community/mountain-hub.

Important conditions to monitor include creek water becoming brown or dirty over time, pooling water on the ground, cracking drywall or shifting walls in homes, cracks in the land or pavement, ground movement of any kind, trees tipping or falling over, overflowing wells, wet basements, clogged culverts, and water or debris washing across roadways, according to state geologists.

If a zone is added to the mandatory evacuation list, three sirens will ring out repeatedly and a Nixle alert will be sent out. Evacuees should check in at the school.

On Tuesday, the borough's flash flood watch was lifted, but Cornejo said instability in the landscape remains as it will take additional days for the water to drain out. She said geologists will remain in Haines for the time being to gather and analyze data.

Slides from Cornejo's Tuesday presentation to the assembly, including maps of the areas of concern, can be viewed at https://www.hainesalaska.gov/community/geoscience-slide-presentation.