Some regional resources in search for missing residents sent home 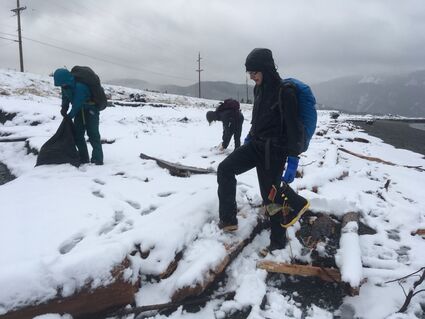 Regional assets assisting in the search for 30-year-old David Simmons and 23-year-old Jenae Larson, missing in the wake of the Dec. 2 Beach Road landslide, were sent home. Meanwhile, on Sunday, local search and rescue volunteers combed beaches looking for artifacts and debris.

"We're placing the search and rescue on a limited search and rescue effort right now, so we've sent back a lot of (regional) resources because we've exhausted them. There's not really much more that we could use them for," Alaska State Troopers Sergeant Nick Zito, supervisor for the region, said in an update to evacuees and press on Sunday.

"Ultimately, we didn't come up with anything related to either missing individual, and I'm sorry about that. Hopefully we will in the days to come. That's still our goal, our intent," Zito said. "The Coast Guard's going to stay here a bit longer. We've got access to that ROV. I'm going to remain here until Friday at least."

Zito said weather in the days immediately following the slide made it difficult to employ search and rescue resources to the fullest extent.

"Weather's been one of our biggest factors," he said. Water-based searches and helicopter flyovers have been used when possible. State geologists continue to say the bulk of the landslide area is unsafe for on-foot search and rescue efforts until rains subside enough for the area to stabilize.

"For the risk level to go down, it does need to stop raining," Engineering Geology Section chief for the Alaska Division of Geological & Geophysical Surveys (DGGS) De Anne Stevens said in a Dec. 4 interview. She said it's impossible to predict when that might occur. "I can't even put a number on it. It's so wet right now, and it's not like we're going to have sunny days to dry things out."

Roughly 10 inches of rain fell in Haines between Dec. 1 and Dec. 2, triggering the slide. Another three inches have fallen in the days since then and more precipitation is in the forecast in the coming days. A flash flood watch for the area has been extended until Tuesday afternoon, according to representatives from the National Weather Service present at the Sunday briefing.

The day after the Beach Road slide, roughly 100 community volunteers showed up at the Public Safety Building, answering a call from Mayor Douglas Olerud to assist with the search. Volunteers weren't put to much use in the first couple of days following the slide.

"Initially we didn't use them as often as we'd like, but that's because we were trying to access that slide area and put the dogs initially in parts that we could, and we didn't want to put people in there and contaminate the area for the dogs," Zito said.

In addition to supporting search and rescue in and around the landslide site, volunteers have been combing beaches on both sides of the Lynn Canal in recent days, looking for debris and artifacts from homes destroyed in the slide. The combing has turned up personal items like ski boots, coolers and dog toys as well as an almost endless amount of styrofoam from house walls.

"We continue to hope. We continue to search, and I think we continue that until we can't. We're not going to give up. I don't think our priorities have changed at all from yesterday with that regard," interim manager Alekka Fullerton said at a noon press briefing on Sunday.

Zito said those involved in the search and rescue effort will meet again on Monday and that any residents who think they have information pertinent to the search should come forward.