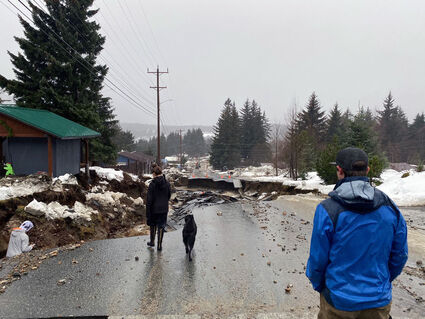 Residents from the Young Road neighborhood walk out to see the damage caused by flooding and mudslides.

"I watched my shoes float out the front door when I left. My car is under water. All my chickens drowned except one. I put her in an upstairs bedroom and am just hoping for the best. My freezer started to float away in the garage. My fridge, I unplugged when I heard it gurgling, so I know all my fish and food are gone. I feel like everything I had is gone," Lindsey Edgar wrote in a Facebook post after she had to evacuate her house on Spruce Grove Road due to flooding. Edgar was one of several residents the Haines Fire Department assisted with evacuation in the early hours of Wednesday morning.

Others in the Haines Borough had homes and cars taken out by mudslides.

"A mudslide took the three-story house into the driveway. Now it's a one-story house," Shori Heaton said of the house her parents own near the end of Lutak. "My mom's in tears over the loss of our childhood home."

Heaton said the house was unoccupied. She said neighbors whose lower story was filled with mud during the same slide event kept her updated about conditions at the house.

"They did say it's still coming down, mud flowing between the houses," Heaton said.

Stranded Beach Road residents were told to evacuate and use lights to signal their location to the Alaska State Trooper boat for rescue after a 600-foot slide took out several homes and part of the road. The Haines Borough's Emergency Operations Center solicited volunteers with any mountain rescue experience to help with search and rescue efforts in the area. As many as six area residents remain unaccounted for as of Wednesday evening.

Numerous roads in the Haines Borough were closed due to extensive water and mudslide damage including Piedad Road, a portion of Lutak Road, North 1st Ave., Cathedral View, Soap Suds Alley and Beach Road. Young Road was rendered completely impassable after a portion of the road caved in.

Several mudslides have been reported along the Haines Highway. The U.S. Coast Guard had to land at the Public Safety Building to medevac a resident (who had to leave for reasons unrelated to the weather event) because the road to the airport was impassable.

"We're just trying to triage," Alaska Department of Transportation Haines station foreman Matt Boron said in an interview Wednesday morning. "I just have no idea right now how widespread the damage is. It's pretty overwhelming right now is about all I can say. I don't have time to talk."

The Haines Borough issued an emergency declaration at noon on Wednesday in response to the weather event and set up a second Emergency Operations Center, distinct from the one that's been handling the COVID-19 pandemic.

"It's bad," borough interim manager and clerk Alekka Fullerton said. "We are on emergency power, which means we have a diesel generator. Currently, the road to Lutak Dock is not passable, so we are trying to put in some contingency plans in the event that we can't get that passable and can't get to the tank farm and replace the diesel."

The best thing residents can do for the time being is stay home, Fullerton said.

"We really don't want people out and about even taking pictures. They're just going to get in public works' way," Fullerton said. "We really need to have people stay away from eroding roads. We've seen a lot of pictures on Facebook of kids playing in sinkholes, which are highly unstable." She said the borough is also asking residents in the Young Road-Mathias Road-Picture Point area to conserve water after a water main broke when Young Road collapsed. 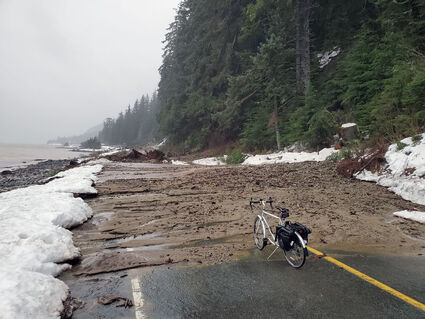 On Wednesday morning, the National Oceanic and Atmospheric Administration (NOAA) predicted an additional one to three inches of rain through Wednesday night with diminishing rainfall beginning Thursday. The previous 24-hour rainfall record for Haines, since record keeping began in 1911, was 5.39 inches in 1946.

Haines residents can report damage to the borough by calling 766-6401 or filling out an online form at https://www.hainesalaska.gov/report-flood-damage.