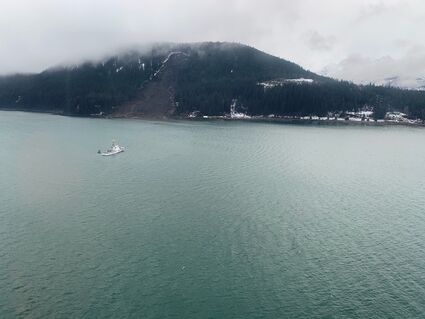 State geologists identified additional landslide risk in the area immediately to the south of the debris field from the Dec. 2 slide that destroyed the home of David Simmons, leaving Simmons and his tenant, Jenae Larson missing. Photo courtesy of U.S. Coast Guard District 17.

There's potential for another landslide on the south side of the Beach Road slide area, based on LiDAR images collected over the past few days. The entire area remains under mandatory evacuation. Residents should not return to homes until further notice, borough officials said at a noon press briefing on Thursday, Dec. 10.

A LiDAR sensor, which employs lasers to measure very precise changes in the topography, has allowed geologists to look at the ground beneath vegetation and snow in the Beach Road area.

Some Beach Road residents apparently made attempts to reach their homes on the south side of the slide Wednesday morning as observers witnessed a skiff traveling back and forth from the beach below the road.

Fullerton said in light of the new LiDAR information, it is critical that people remain out of the area.

The Alaska State Troopers are providing an additional state trooper and wildlife trooper to help secure the area south of the Beach Road slide, Fullerton said.

"(It) could theoretically empty out the harbor or a lot of debris could be brought into the harbor," Fullerton said, adding that the harbor wall protected the facility from the first two tsunamis. Fullerton said because the slide potential is to the south of the current slide area, the positioning suggests the tsunami will likely miss the harbor again.

Officials said they had hoped the slide area would be safe to enter once water drained from the ground, but the risk of a potential slide has delayed the timeline. "We are planning on having SEADOGS do some further investigation in that area as soon as it is safe to do so," Fullerton said.

Officials are asking people to remain out of the slide area due to safety concerns and to keep the scene intact for future investigation efforts.

With assistance from state geoscientists, the Emergency Operations Center has defined areas of landslide concern throughout the borough. At presents, Beach Road is the only area under mandatory evacuation. Long-term housing plans for those displaced remains uncertain.

"We're working on that," Fullerton said. "It's just a really dynamic situation. This area has changed dramatically from what we thought last night." She said geologists are working to collect higher resolution LiDAR images to refine risk assessments in the area.

Fullerton said data suggests other areas throughout the borough are continuing to stabilize. "The other areas are all doing much better as we dry out."

Fullerton said state geologists will remain in town analyzing landslide risk until the ground stabilizes. Even after the geologists leave, they will continue to monitor Haines from afar with assistance from local experts like Erik Stevens and Liz Cornejo.