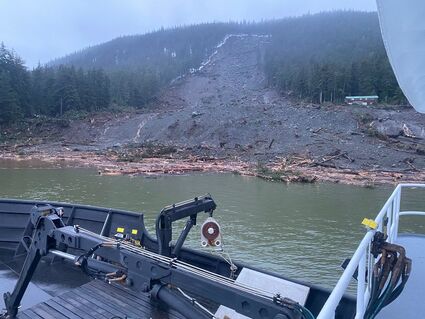 A view of the Beach Road slide from a search and rescue vessel. Photo courtesy of Alaska State Troopers.

On Friday, three State of Alaska geologists were finally able to get into Haines via the ferry to begin assessing the stability of the area on Beach Road where a Dec. 2 mudslide took out several houses and left two people missing.

The geologists are an important part of determining whether it's safe to send rescuers into the slide area. Prior to Friday, weather and a low cloud ceiling had prevented geologists from flying in via helicopter.

"The first part of what they're doing is trying to determine the safety level and risk level of where the search and rescue is taking place around the slide. Secondary to that is assessing what the potential hazard is for folks throughout the Haines area," said Engineering Geology Section chief for the Alaska Division of Geological & Geophysical Surveys (DGGS) De Anne Stevens, who's coordinating the DGGS geological assessment effort from Fairbanks.

Two of Stevens' team members are in Haines right now along with a geologist from the Alaska Department of Transportation.

"They didn't get in until midday, so they were only out for a few hours with the light. They're seeing a lot of instability out there, a lot of water-saturated soil. (On Friday), at least, they determined it's not safe for search and rescue folks to go out beyond the margins of the slide area," Stevens said.

Geologists surveyed the area from a boat and from the margins of the slide area accessible by road, but the ongoing weather event has made it difficult to use some of the tools geologists normally employ in these situations, Stevens said. Typically, they use tools including drones and helicopters to collect aerial images of what's going on, including where water's draining and the relationship between larger landscape features.

A LiDAR sensor, which employs lasers to measure very precise changes in the topography and allows geologists to look at the ground beneath vegetation, is currently weathered-in in Juneau. Stevens said the hope is to be able to fly in the equipment as well as two additional DGGS geologists on Saturday if the weather opens.

In the meantime, the three geologists in Haines are doing what they can to assess slope stability and soil saturation around Beach Road.

"We're working on ways to be able to monitor what's going on upslope to see if motion is still happening," Stevens said. This involves looking at large rocks on the slide surface and comparing their location over time to see whether they are moving.

"We're also looking for evidence that the ground is solidifying more," Stevens said. She said right now, it's clear that the soil is too saturated with water for anyone to safely enter the area. "If rescuers tried to walk out, they would sink. It's a goopy slurry out there. You can't walk across it."

After a brief reprieve on Thursday, precipitation has returned to Haines. Stevens said that water in and on the ground will need to drain before people can enter the area safely.

"For the risk level to go down, it does need to stop raining," Stevens said. She said right now, it's impossible to predict when that might occur. "I can't even put a number on it. It's so wet right now, and it's not like we're going to have sunny days to dry things out."

At an update for evacuated residents Saturday afternoon at the American Legion hall, Mayor Douglas Olerud said the team of geologists advised the borough's Emergency Operations Center (EOC) that it's unsafe to navigate the slope on foot until four days after the rain stops.

"I know that's not the news any of us want to hear, but with the high water volume they're very concerned and they want to keep people safe," Olerud said.

On Saturday, geologists in Haines will continue working with search and rescue to figure out if and how rescuers can enter the area safely, Stevens said. A second team of geologists will work to assess areas throughout the borough prioritized by the EOC. In those areas, geologists will look for evidence of slide potential, indications like ground cracking, fallen trees and water seeping out of the ground.

DGGS is asking for help from community members as they work to assess slide potential.

"This storm produced landslides and slope instability issues in many locations around Haines, far too many for our geologists to investigate. So, we want to use the power of the crowd," manager for DGGS Climate and Cryosphere Hazards Program Gabe Wolken said.

Community members are asked to submit photos and observations of slide activity using the Mountain Hub app, available at https://mountainhub.com.

Stevens said at this point, it's impossible to estimate when evacuees will be cleared to return to homes. Residents have evacuated neighborhoods including Beach Road, and Piedad and Cathedral View due to slide potential.

"I think it's conceivable that a team could go out to a place that's been evacuated and determine there's no evidence of slope instability, but it has to be done on a case-by-case basis. We are providing input to the EOC so they can determine what areas are safe to re-occupy. We definitely don't want to send people back into places where there's a risk of something happening," she said.

Precipitation is expected to continue through the weekend with at least 2 inches of rain expected between Saturday and Sunday. A flash flood watch remains in effect through Sunday at 9 p.m. More than 11 inches of rain have fallen in Haines since Monday, and more precipitation is predicted next week, a combination of rain and snow.