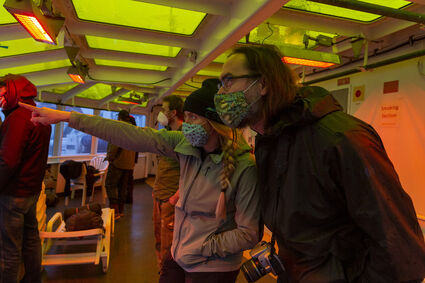 A team of state geologists briefed displaced residents Sunday evening and said small, localized instabilities are still occurring across the landscape as rain continues to fall, and areas that slide will pose risks come spring.

"It will take time before the soils are back to the way they used to be and freezing is not going to increase that speed," Alaska Department of Natural Resources geohydrologist Ronald Daanen said. "All exposed areas that have no vegetation because of landslide events now likely will have more instabilities during spring snow melt."

Although the exact cause of the Beach Road slide is still unclear, Daanen said that differences in rock and soil types at the source of the Beach Road slide likely contributed to instability. Daanen said weathering can occur at a faster rate in an area where two different rock or soil types meet because water can infiltrate along those boundaries and break down the rock

"Water can infiltrate more easily in these situations when you have more water pressure in the soils," Daanen said.

The geologists haven't yet been able to travel on foot to the top of the slide to get a close look at the rock and soil there, but reconnaissance photos from a helicopter survey show what appear to be several different kinds of rock and soil, "that could have again concentrated the water in that area allowing more of the (rain) to infiltrate again adding to the water pressure of the soils there."

Landslides occur when the material on a steep slope, held only by gravity, becomes overly saturated with rain. More than 10 inches of rain fell on the Chilkat Valley on Dec. 1 through Dec. 2, a 200-year event said National Oceanic and Atmospheric Administration senior forecaster Nicole Ferrin.

"A 200-year event is extremely rare, which is why we've never seen slides at 27 Mile and all these weird places," Ferrin said.

Daanen said if water infiltrates the ground at a fast enough rate, the pressure created overcomes the ability of the soils to hold together, and it forces the land down hill.

The geohydrologist said he thinks the Beach Road slide started at the base of the steepest part of the mountain, where water can infiltrate rapidly at a low point. "Then it starts bulging up because there's more water pressure than the soil can hold down. The soil bulged up and then moved its way down."

Daanen said he and a team of three other scientists will remain in Haines observing instabilities across the landscape. They saw smaller, localized instabilities on Mount Ripinski, and signs that the land was sustaining an unusual amount of water pressure.

"I saw a lot of ground water coming out of the base of the rocky slopes," Daanen said. "It was an unusual amount of water because the creeks that are associated with those springs were running at flood height."

Those signs are why the Haines Borough Emergency Operations Center (EOC) notified residents living north of Main Street, between Piedad Road and Picture Point to prepare to evacuate in case a mandatory order comes. Geologists, police and volunteers are monitoring conditions as rain continues to fall. The state team urged Haines residents to report signs to the EOC at 766-6445 or to an app called Mountain Hub. Information on the app can be found at https://www.hainesalaska.gov/community/mountain-hub.

The EOC and geologists want residents to monitor steep terrain above them and to be vigilant for any changes. Important conditions to monitor include creek water becoming brown or dirty over time, pooling water on the ground, cracking drywall or shifting walls in homes, cracks in the land or pavement, ground movement of any kind, trees tipping or falling over, overflowing wells, wet basements, clogged culverts, and water or debris washing across roadways.

State geoscientist Katreen Wikstrom Jones said they've seen openings in the ground in various locations, cracks that look like "a brown frown, a sad face on the slope" and want to monitor them for changes as weather continues.

Slopes south of the Beach Road slide remain unstable. "We've seen (from the air) a couple of fractures in the soil south of the landslide," said Wikstrom Jones. "We basically want to come back there, fly again tomorrow if we can, and the next day if we can and see if anything's changing."

Rain showers are expected for the next two days but then colder temperatures should arrive toward the end of the week, Ferrin said, and harden the ground some.

Looking into the long-term, all areas affected by landslides will become unstable again in the spring, Daanen said.

Geologists have been in Haines for three days, but have been mostly hampered by the weather and unable to observe many places.

"We're not going to leave when it stops raining," Wikstrom Jones said. "We're going to stay here and see how things are changing."

Piedad Road, Cathedral View Road and Beach Road remain under mandatory evacuation based on evidence of ongoing instability. Residents should not return to these areas.