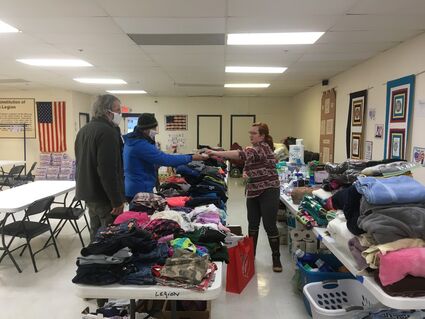 Your house is flooding, what do you save?-a classic hypothetical many in Haines thought they'd never have to answer until Dec. 2.

"I live out Beach Road. It sounded like there was a freaking jet landing on the cabin. When I heard that, I knew exactly what it was," Michelle Ward said. She and her family were among those who evacuated the neighborhood Wednesday evening after a mudslide came down, tearing through several homes in the area and leaving two people missing.

"We evacuated by boat. Everybody stayed pretty calm. (Beach Road residents) all met and decided where the best place to get down to the beach was. We packed up what we could," Ward said. "I grabbed our medication and the dog and some slippers." She said she can't really explain the impulse to grab the slippers, although they were one of a kind, hand-beaded by her daughter's mother-in-law.

"There's no your-house-is-flooding checklist," said Lindsey Edgar, who evacuated her flooding Spruce Grove home Wednesday morning with assistance from the Haines Volunteer Fire Department. "I wish there was."

For Edgar, the list of items to save included her mother's handgun, personal journals and her dog's bed. "I didn't know where I was going to sleep, but I thought, my fur baby is going to have a bed. It's better to take care of something else than to try to worry about what you have to deal with. Making her feel better makes me feel better," Edgar said.

She returned to her house Thursday afternoon to assess the damage and retrieve her dog's food bowl. The carpet on the bottom story was waterlogged and the basement was still filled with water. Edgar said one of her top priorities is to get in touch with FEMA to see what kind of economic assistance is available to homeowners, but she said she's not sure how to go about this.

The American Red Cross is offering casework assistance to those displaced from homes. "We're willing to help with needs, whatever they are," said Linda Geise, who retired from the Red Cross a year ago and came out of retirement to assist with the disaster. Geise said those who want assistance from the Red Cross need to fill out a registration form available at the American Legion.

The American Legion is headquartering several social services organizations assisting with relief efforts including the Salvation Army, which is partnering with the Red Cross to house evacuees at local hotels, and Lynn Canal Counseling, which was displaced after flooding at the office.

In addition to the physical trauma of flooding and mudslides, there is a significant psychological trauma for those displaced from homes.

"I'll get mad, and then I'll be sad, and then I just feel totally numb. My body is sore even though I didn't do anything. My muscles are sore like after a workout," Ward said while collecting clothing for her family at the American Legion. "I can't sit in a hotel room and do nothing. I'm packing this stuff up to make sure the guys have something warm when they come home from work."

Those in need of counseling services can contact Matt Jones, who is coordinating with Lynn Canal Counseling, at 314-2429.

There is currently a Haines, Alaska Disaster Relief GoFundMe raising money for residents impacted by the disaster. As of Thursday morning, it had raised $107,345.