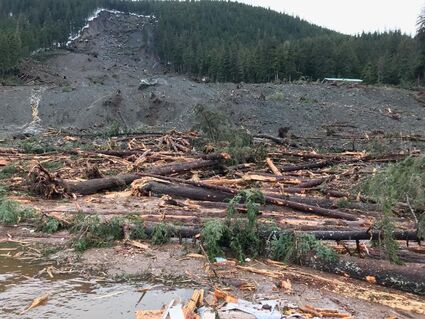 The Dec. 2 slope failure at Beach Road that left two residents missing is at once tragic and unexpected, and also not at all surprising for Southeast Alaska, according to state geologists. The region is prime landslide territory and a changing climate-trending toward warmer, rainier winters-is likely to increase the frequency of slides in the future. Statewide, there's a lack of data and resources available to help municipalities incorporate slope stability assessments in community planning, a problem scientists have been trying to address.

"Water and the steepness of the slope, those are the key ingredients to landslides in Southeast Alaska," said Engineering Geology Section chief for the Alaska Division of Geological & Geophysical Surveys (DGGS) De Anne Stevens, who's coordinating the DGGS geological assessment effort to assist search and rescue in Haines.

Until recently, Southeast was covered with glaciers. Deglaciation left behind the steep, stunning peaks that characterize the region's landscape. The area is also a rainforest, "a climate with weather systems coming through where there's so much rain," Stevens said.

In Sitka in 2015, a landslide killed three after it tore through a neighborhood.

Haines has a history of landslides including the slide area at 19 Mile Haines Highway. In 2012, heavy snow and rain caused a slump and ground movement on the Mount Ripinsky hillside in the Young Road neighborhood.

The current weather event, which dumped rain on Southeast during an already wet year, triggered landslides throughout the region.

"This is a particularly brutal series of very wet weather events that are kind of piling up right behind each other," Stevens said. "Haines clearly has had the largest slide and the slide that has impacted the most people, but there are reports of damage and ground moving and flooding throughout much of Southeast Alaska. There was a slide in Juneau the other day and road damage in Hoonah."

While landslides are a fairly common occurrence in Southeast, the Beach Road failure came as a surprise for many locals.

"I don't think anyone had any idea that the property was anything but geologically safe. What a wakeup call," former Mayor Fred Shields said. Elected in 1988, Shields oversaw the construction of Beach Road and the sale of roughly half the properties in the borough subdivision.

"Anytime you're digging into terrain and slopes and changing the course of nature, that can have impacts on drainage that then has impacts on the geology of where you're building and working," former Haines Borough manager Robert Venables said. "This week's events are happening in places that no one even contemplated any level of risk."

"I looked at some of the data that are out there. Typically, the steeper the slope, the more likely you would expect something like that to happen. The slope on Beach Road, it's not the steepest around, so in that respect it's a little surprising," Stevens said. She said the slope failure likely has to do with site-specific factors like slope material. "I think we would have been hard pressed to look at the data for Haines and be able to point to that slope and say, 'That's the one that's going to go next.'"

Stevens said there are approaches communities can take to mitigate landslide risks.

"There are a few things that people can be thinking about with subdivision planning like conducting geotechnical studies prior to putting in subdivisions," Stevens said. With that information, "you can be in a much better position in terms of being able to lay out subdivisions to minimize at least what we would understand as risk in those situations."

However, this sort of communitywide geological assessment doesn't tend to happen in Haines, or in Alaska in general, according to Stevens.

Shields said the borough didn't do a geological assessment of the Beach Road area prior to building the subdivision.

In Haines, when geologic assessment is done prior to construction, it's done on a very localized level, lot by lot, at the discretion of the Haines Borough Planning Commission.

Heinmiller said while slope stability hasn't been a big part of the conversation in the past, the Beach Road slide will likely trigger a borough discussion about the role of geological assessment in future community planning.

"You know how it is. Until the wheel starts squeaking, nobody pays attention to it," Heinmiller said.

A big barrier for geological assessment when it comes to community planning in Alaska is cost and lack of baseline information, according to Stevens.

"There's a lot of information needed to get a really good handle on slope stability characteristics (including high resolution topographic models and information related to soil composition and weather). Most of that information doesn't exist for most of Alaska, especially at the detailed level needed. Some firms gather this level of information at a site-specific level. I've seen it done for some schools and tank farms, but I haven't seen it done on a communitywide basis. It would be very expensive under current circumstances," Stevens said.

Despite the costs associated with slope stability assessments, the need for them is increasing in Southeast Alaska. Weather patterns like the one that led to the Beach Road slide are happening more and more.

"More extreme weather, including periods of stronger winds and greater rainfall, and warming average temperatures are both a part of climate change and were accurately predicted by the International Panel on Climate Change several years ago... the warmer the temperatures get, the percentage of snow versus rain during the winter will decrease," climate expert for the National Weather Service in Juneau Rick Fritsch said.

Heinmiller, a lifelong Haines resident, said while the community has always had weather systems come through, dumping precipitation on town, in the past, these winter storms tended to drop snow. "It was more into the late '80s, early '90s when it really started to warm up some."

In 2005, heavy rains in Haines were followed by flooding that caused roughly $2 million in damage to roads, public facilities and private property.

"The 2005 flood was very interesting. They said it was a hundred-year event, but it seems to happen more frequently," Shields said.

In 1998, Haines dealt with flooding and road damage. In 2012, large volumes of surface water combined with the elimination of natural drainage systems caused soil to shear, leading to sliding in the Ripinsky area. In January 2014, flooding occurred after heavy rain followed above-average snowfall in December.

None of these events compare to what Haines is going through now, according to Jim Studley, who has lived in Haines for 35 years and was involved in developing the borough's first emergency response plan back in 2004. "The 2012 slump, it was miniscule compared to-there is no comparison to what we have experienced. For Haines, this would be the equivalent of a Katrina. This is a mega-disaster. There is no comparison."

Stevens said she thinks that more slides are occurring and will continue to occur as the climate in Southeast Alaska changes. Although she added that increased population could factor into the perception of more landslides.

"Weather is a product of the climate, which seems to be getting wetter and warmer. These sorts of slope failure events are strongly controlled by weather. Rain upon rain upon rain seems to be happening more," Stevens said. She said throughout Alaska, warmer temperatures are also increasing the risk of slides at higher elevations as alpine permafrost thaws, softening and saturating the ground.

State experts have known about a need for more slope stability information in Alaska for some time.

"With the increase in warm, wet weather systems, there has been an awareness that more information is needed, that it's worth investing money regarding the potential for slope failure, for about a decade," Stevens said. She said the 2015 landslide in Sitka was a particular trigger and even brought in some FEMA funding to do a landslide-potential assessment.

Stevens said there is an effort to bring additional funding into the state to do more slope stability assessments. "We have irons in the fire to try to bring money to bear at this problem. It's going to take money, time and people resources to do it right."

Stevens said while daunting, resources need to go toward this effort as soon as possible. "We've got to get this done, or we're going to be caught flat footed again and again and again."

In the past week, Haines has received more than 12 inches of rain. There's precipitation in the forecast in the coming days with a flash flood watch through Sunday at 9 p.m.