Be on the lookout for scammers in the wake of natural disasters, state officials say 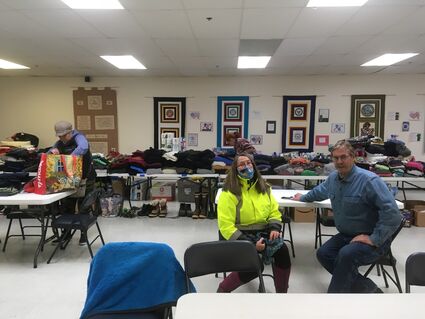 Beach Road evacuees gather at the American Legion where organizations including the Salvation Army, Red Cross and Lynn Canal Counseling are working to provide them with the resources they need. Ceri Godinez photo.

Natural disasters like the widespread flooding and landslides in Haines this week can bring out the best in people-an outpouring of volunteerism, donations and small acts of kindness-but the situation is also ripe for scammers, according to state officials.

On Friday, Haines resident Lea Harris received a Facebook message from somebody who claimed they were a friend of a friend Harris knew tangentially from time spent in Ketchikan.

"But it wasn't really her. It was somebody posing as her," Harris said. "(The alleged acquaintance) said, 'We're on the Kenai, and we're really worried about you. We'd like to send you some relief.' I said, 'Thank you very much.'"

Harris said it took a few exchanges for her to realize something was off.

"They said they wanted to send a truck full of goods. I said that we couldn't get a truck here because the border's closed. They said, 'Well, we did the loan for your house. We refinanced it for you.' Well, I've never had my house refinanced,'" Harris said.

She said the comment made her suspicious. The alleged acquaintance then asked if they could send aid money directly to Harris. Harris said she directed them to go through the Salvation Army. The scammer stopped responding soon after.

"I just want to let people know to really be careful because it didn't dawn on me right away that they were trying to scam me," Harris said. "It wasn't until I showed (the messages) to a friend. I said, 'Look at this. Isn't it weird?'And my friend said, 'No, this is a scam.'"

These types of scams happen in the wake of natural disasters, according to Alaska Division of Homeland Security and Emergency Management public information officer Jeremy Zidek.

"We do hear of these things for most disasters. We hear of people trying to take advantage of those that have been affected," Zidek said, adding that this is the first occurrence he's heard of related to the Haines disaster. "Unfortunately, during the (2018) earthquake in Southcentral, we saw people that were trying to scam others, and I've heard about it in other disasters as well."

Zidek said the scams that tend to crop up around these events are usually isolated efforts, individuals targeting other individuals.

"There's a couple of ways it will come across. Sometimes it's just requesting sensitive information. Sometimes scammers will send a check to the person with some type of fee and then they are instructed to deposit it into an account and withdraw a small amount and send a portion back to the scammer," Zidek said.

People should also be on the lookout for fraudulent Gofundme pages in the wake of disasters, according to Zidek.

"I've seen a lot of Gofundme pages pop up. Folks should be mindful of who's managing those pages. People will solicit funds without any intention of providing aid to those in need, but then there are Gofundmes where every cent goes to help people," Zidek said.

He said things residents and those looking to donate to Haines can do to protect against scammers includes verifying an organization's legitimacy before they donate. He said the Haines Borough, Red Cross and Salvation Army are good starting places.

People should also be mindful about when they are asked to provide sensitive information. "Social security numbers, date of birth, bank account numbers-don't give that out to anyone you don't trust and really work to confirm that they're a legitimate organization. The bank won't ever call you up and ask for your bank account number," Zidek said.

Those who believe they have been the victim of a scam can alert local law enforcement. They can also file a complaint with the Alaska Attorney General's office: http://www.law.state.ak.us/department/civil/consumer/cp_complaint.html.

A list of official donation and volunteer pages can be found at: https://linktr.ee/HainesDisasterRelief?fbclid=IwAR1RpJk5uycAAxdwXPK4brk9hxT8sARh53TI9eXXHEhfeyr8H0BqE9V8U5U.

Zidek said for those outside the community, cash donations to relief organizations are often the most effective way to help. In recent days, volunteers entering the community have filled local hotels, displacing landslide evacuees who had been sheltering in the rooms.

"If you want to volunteer, first make sure when you get there, you're going to have a role. The area's already taxed, caring for people who can't return to their homes," Zidek said.

The Haines Borough sent out a notification on Saturday asking volunteers to stay out of the community for the time being.

"If you are not part of the organized response to the emergency in Haines, it is critical that you do not attempt to come to Haines at this time. Our hotels are full and we have sufficient volunteers for the immediate needs," the message reads.

Zidek said there will likely be volunteer opportunities in the future as the community works to rebuild.