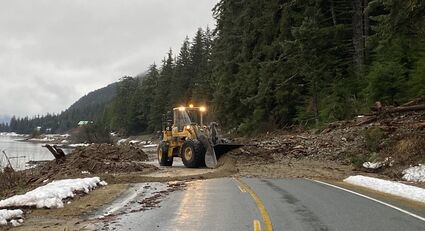 AP&T crews are working to restore power to 46 Lutak homes today, Dec. 5, as long as access remains and conditions are safe.

"With any luck, (we're) hoping by the end of the day Saturday we will be able to reenergize the lines," AP&T operations manager Lance Caldwell said Saturday morning. "Currently crew is out attempting to restore power to the Lutak residences and we are actively monitoring for any road conditions or evacuation orders to immediately leave the area if needed."

Caldwell said most of their efforts are aimed at maintaining power to town and they're only sending a few crew to outlying areas in the event additional landslides cut workers off from town.

"I have to keep enough personnel in town to always support the power plant and try to keep the town center energized," Caldwell said.

Power and access to town was cut off to Lutak homes late Tuesday evening as heavy rain precipitated an unaccounted for number of slides across the Chilkat Valley.

Lutak residents were heartened to see the blinking lights of heavy equipment vehicles through the mist Thursday and Friday. State transportation workers cleared a single lane through dozens of slides across Lutak Road on Thursday and again on Friday. DOT crewman Daniel Fitzpatrick cleared the last slide around 7 Mile Lutak Road late Thursday afternoon. When asked how many debris flows workers cleared along Lutak Road, Fitzpatrick said there were so many he lost count. The road remained largely intact, besides a small section near The Gathering Place where a thin strip of pavement is sunk.

A line of about seven vehicles was waiting at the final slide Thursday, but most residents turned around and headed for home after Fitzpatrick warned that conditions were still unstable, water was still pouring off the mountain sides across the road and that they could be cut off if they attempted a trip into town.

A handful of area residents evacuated to town Thursday including Tim McDonough and Anne Myren and Richard and the Buck family. Others left Friday.

"We currently have ninety-five percent of the customers with active power in the Haines area," Caldwell said Thursday. "The remaining five percent are in areas either not accessible at this time or still in evacuation areas that are deemed not safe."

If crews are able to restore power to the Lutak area today, that will leave 32 homes without electricity, those behind the Beach Road landslide where residents evacuated earlier this week.

Those residents are being housed at the Captain's Choice, the Aspen and the Eagle's Nest Motel. Red Cross workers arrived in Haines on Friday and will continue to address lodging for displaced residents and assist with counseling services.

NOAA is forecasting heavy rain at times through Saturday and into Sunday morning followed by widespread rain showers Sunday. A flash flood watch is in effect through 9 p.m. Sunday.

Caldwell asked residents to check their breakers, especially their meter breaker to see if it needs to be reset before reporting any power outages. He asked residents to turn off their main breakers at the meter if their home is flooded.