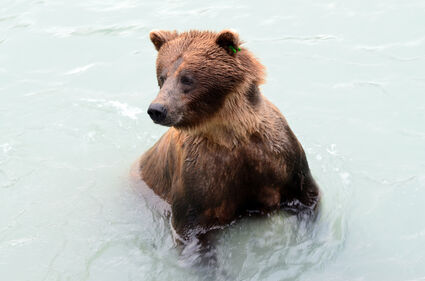 Beloved Chilkoot bear Speedy was killed legally during the 2019 hunting season. She had eight cubs during her 15-year lifespan. She was famous for her patient, even temper and the way she cared for her cubs.

News of the death of Speedy, a beloved brown bear matriarch in the Chilkoot Corridor, has attracted the attention of admirers as far as Switzerland. Speedy was killed legally during the 2019 hunting season.

"Anybody that walked the road could tell it was Speedy because of the green tag in her ear and the way she acted. She was quite the lady," said Quebec resident Maureen Bedard, an avid photographer, who routinely travels to Haines for vacation. Bedard said she came to know Speedy seven or eight years ago during a visit and continued to track the bear over the years.

Speedy, known as Bear 235 by the Alaska Department of Fish and Game (ADFG), was born in 2004 to a sow that frequented the lower Chilkoot River.

Speedy was collared by the department in 2008 as part of a brown bear habitat study. Her home range was roughly 60 square miles in the Chilkoot watershed area, according to data collected by ADFG.

According to an Oct. 11, 2012 CVN article, "'Speedy' was named by tour guides for her habit of charging people along the river and snatching whatever food they left behind."

In the same article, ADFG biologist Anthony Crupi said, "She matured out of her bad habits during the study," dispelling the commonly held theory that bears that learn to equate people with food will only become an increasingly dangerous nuisance.

"She proves that these are not necessarily lifelong habits," Crupi said in 2012. "The two to three-year-old age is when they get into trouble, but as adults, they may straighten out."

Crupi, who tracked Speedy's mother between 2000 and 2005 while doing research for his Master's thesis, said in a 2020 interview that Speedy followed fishing patterns similar to her mother's, along the lower Chilkoot River, a bear-viewing area frequented by tourists.

Crupi said it's not surprising to see people forming bonds with the bears they observe.

"235 was an extremely patient bear, who tolerated people as a trade-off to securing greater access to salmon. She successfully navigated the web of anglers, tourists and recreationists along the Chilkoot River without many problems," Crupi said. "When bears do not become conditioned to human food, and learn to not fear human presence, people can have extremely valuable wildlife-viewing experiences that teach us about the world around us and often ourselves."

Speedy fans remember the bear's patient temperament and ability to educate people about how to behave around wildlife.

"Speedy gave me a great portion of understanding and tolerance," Switzerland resident Thorsten Boehm said. "In moments when I came too close to her, or moved too fast, her different postures showed me her displeasure very clearly without attacking me. I thank her for that. (It gave me) the chance to learn from Speedy how to behave and react in the presence of bears."

"I respected her tremendously and she, I think, respected that I would make a point of leaving her alone and behave reliably," Chilkoot resident Sally McGuire said. She said when Speedy would pass by her garden, the two would pretend not to see each other.

"I would peek at her, though, as she went by, and I could see her peek at me. I definitely wouldn't try that with any other bear," McGuire said.

Speedy is also remembered as a mother. She had eight cubs over her 15-year lifespan, although their survival rate was low.

"She always took care of her youngsters so very well. It was just incredible," Bedard said. "She'd come out with her cubs and teach them how to fish salmon... Even after she kicked off the older cubs, she was always keeping an eye on them."

Bedard, who was unable to make her annual visit to Haines due to this year's border closure, said she kept asking Alaska Chilkoot Bear Foundation member Ann Puffer if she'd seen Speedy this year. Eventually, she learned that Speedy had been killed.

"I know she'll be missed, and I pity the poor guy who shot her," Bedard said. "I hope one of her offspring continues her work in educating people."

For some, the sentimentality surrounding Speedy's death raises other questions.

"I don't know bears by name. We don't name bears. We name dogs," hunting guide Larry Benda said. He said he sees a downside to the human-bear interactions in the Chilkoot Corridor.

"This isn't Disneyland. Bears are wild creatures, and it's only a matter of time before someone gets hurt on the Chilkoot River," Benda said. "When bears are accustomed to people, they think they can do whatever they want," he said, citing the high bear activity in town this year.

The Fish and Game habitat study suggests Chilkoot bears aren't the same bears that have been causing problems in town this year, Crupi said.

McGuire sees another problem arising from the human-bear interactions at Chilkoot.

"There's another problem, too, which her death brings into focus, which is the matter of these habituated bears getting shot when they get away from the river," McGuire said. "An awful lot of people know that many of the bears' day beds are up on the ridge on the Glory Hole side."

Benda said although he thinks the bears on the Chilkoot are accustomed to people because of all the tourist activity, he doesn't think this impacts how easy they are to hunt. The majority of the bears that interact with Chilkoot tourists are young bears and mothers with cubs, as opposed to the larger boars that hunters tend to target, he said.

Fish and Game biologist Carl Koch has asked hunters to target males this year due to the record number of bears killed outside the hunt. As of Tuesday, of the eight bears harvested in this year's fall hunt, six were females. Fish and Game doesn't release the location of where bears are hunted, but Koch said no female bears have been harvested in the Chilkoot area this fall so far.

It's illegal for hunters to take a brown bear sow with cubs under state law. Although Speedy frequently had cubs with her, she had separated from her most recent set during the 2019 summer.

Puffer said she's organizing a memorial plaque for Speedy and would like to host a memorial service for her sometime next spring.

The average lifespan of a brown bear is 20-30 years.