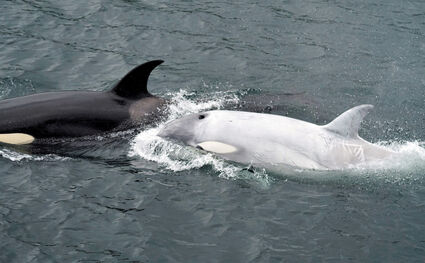 Be on the lookout for this rare white killer whale. Stephanie Hayes, a marine biology doctoral student at the University of Alaska Fairbanks, said the 2-year-old killer whale was spotted near Petersburg, but that it belongs to a pod that lives and feeds across Southeast. "That pod does come up to Haines so it could be headed your way." Hayes said there are less than five documented white killer whales and some scientists think its coloring comes from a gene mutation known as leucism linked to inbreeding. "Due to the steady decline of killer whale populations, there's a high rate of inbreeding and that could cause high rates of leucism in the population," Hayes said.