Historic piano hits all the right notes at the Haines Bookstore 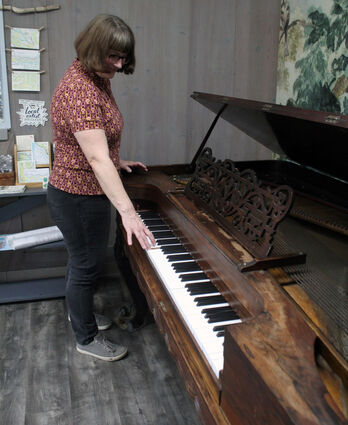 Haines bookstore owner Amy Kane went looking for a display table on Haines Classifieds and came away with a square grand piano from the 1800s.

The piano, a William Knabe and Co. instrument with a carved Brazilian rosewood exterior, came from the home of former Haines School principal Rene Martin, who moved to the Lower 48 in June. In preparation for the move, Martin was offering the piano for free to a good home.

"I knew no one would pay for it because it's so big and awkward," Martin said. "I was afraid it would be repurposed and not be able to still be a piano."

It took eight people to move the instrument from Martin's home to the bookstore.

The piano's extreme heft comes from the cast-iron plate inside the instrument, said Dan McElrath, concert piano technician for Alaska Piano Services in Anchorage. McElrath, who originally trained at the Steinway factory in New York, has been servicing and rebuilding pianos for the past 40 years.

"Square grands were the first serious pianos made in the 1800s," McElrath said. Pianists playing on earlier versions of the piano would shred the instruments, so piano makers started innovating to increase durability.

"They put cast-iron plates inside the instruments so they could string stronger strings," McElrath said.

The square grands were the first pianos to implement this technology. They were state-of-the-art instruments until 1859 when Steinway patented the overstrung scale, allowing pianos to be built with longer strings for a more powerful sound. The last square grand made in the U.S. was manufactured in 1904.

The square grand in the bookstore was built in 1889 in the Knabe factory in Baltimore.

Knabe pianos that made their way to Alaska before 1914, the year the Panama Canal was completed, had to be shipped around the tip of South America, McElrath said. "It was quite a long journey for the ones that did make it."

Kane said she believes her piano entered the state via Skagway during the Klondike Gold Rush in the late 1890s.

"If only this piano could talk. Can you imagine being a piano in Skagway during the gold rush?" Kane said.

Kane has been working to piece together the piano's history since acquiring it for her shop. She said she learned the piano moved from Skagway to Haines in the 1920s.

"It's nice to have it in a public space," Kane said. She estimates that once a week a customer with a personal connection to the piano will enter the shop and share memories of the instrument.

Last week, while making a purchase at the bookstore, customer Judy Weir said she remembers "plunking on the piano" with Doc Allen's granddaughters, Ruth and Alice, in the mid-1950s.

Over the course of its century in Haines, the piano has changed homes several times. Martin said she acquired it in 1995 from the Fogcutter Bar.

"I got it moved for two cases of beer," Martin said. "It had been sitting there for several years and the owner wanted it out."

Before the Fogcutter, the piano resided in the Chilkat Center, and before that, it was in the Hannon family home, Martin said.

Over the years, the piano has fallen into disrepair.

"Not all the keys play. It needs some work and some tuning," Kane said. She would like to fix it up one day.

"I would love to hear piano in the bookstore while we sit around and drink wine and talk about books," Kane said. "Doesn't that sound magnificent?"

Restoring an old square grand is expensive and logistically complicated.

McElrath said he personally knows of three square grands in Juneau and a half dozen in Anchorage, but only one is still in playing condition.

Rebuilding a square grand is difficult because the parts are different from modern pianos, McElrath said. "Square grand parts can be found but often have to be custom made."

Tuning a square grand is another challenge, he said. Modern pianos have tuning pins up front for easy access. On a square grand, the tuning pins are in the back of the piano, requiring the tuner to hit a key and lean across the piano to make the adjustments.

Kane said at present, her piano repair budget is a little small. Business has been slow at the bookstore due to the pandemic. For now, she said she plans to use the piano as the display table she had initially intended to purchase.