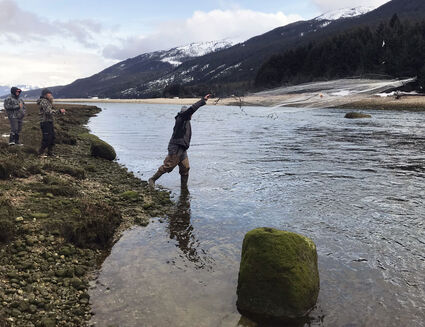 A fisherman tosses his net at the mouth of Chilkoot River on Friday, April 24.

As spring slowly unlocks in the Chilkat Valley, so too have state social distancing restrictions, which happened to coincide with the Chilkoot River eulachon run where friends and families socialized in person for the first time since March.

According to state COVID-19 health mandates effective April 24, members of different households were able to recreate outdoors as long as groups do not exceed 20 people and non-household members maintain a six-foot distance.

Families and groups flocked to the river over the weekend, dotting both sides of the Chilkoot's banks. Terry Davis, Viva Landry and their family loaded a green plastic trash can before dumping it in their tarp- lined pickup truck. Landry said two truckloads would be a successful harvest. The family has pits at 4 Mile Haines Highway they use to ferment the fish before processing them into oil.

Chilkoot Indian Association fisheries specialist Ted Hart said tribal members reinforced the need to maintain social distancing requirements especially because many fishermen give eulachon to elders. "A lot of our elders really appreciate this time of year," Hart said. "The eulachon lift their spirits, but we have to protect our elders at the same time."

Hart said the run has started slowly, but is gaining momentum. He said he likes to let the early run, the "scouts," return undisturbed before fishing and that he plans to fish this week. "My son's been asking for a while," Hart said. "He really wants to go dip some."

Sean and Rhianna Brownell's family were among the first to throw their nets in Chilkoot River on Friday afternoon. Their outing yielded several coolers filled with the oily fish that they planned to fry, process for oil, and give to The Kroschel Wildlife Center for human and animal feed.

Juniper Brownell, 6, caught fish with a net and took one home as a pet on Friday and released it the next day, still alive, back into the Chilkoot.

Residents walked the Chilkoot's banks and watched the spectacle unfold through the weekend. On Sunday afternoon, among the screeching gulls and barking sea lions, a 6-year-old girl who saw a friend for the first time since March squealed her name and sprinted toward her with outstretched arms. The older girl, more mindful of health practices, ran away from the child while another girl shouted "That's the opposite of social distancing!"

Brent and Jessica Crowe and their children fished Saturday and Sunday. They harvested 15 gallons of fish. "We smoked a big batch and tilled what we didn't use into the garden."

Brent Crowe said the eulachon run felt like a coming out after everybody had been locked away. He said being around other people reminded him that the rest of the world is still going on. "It's nice to see there is going to be something beyond this," Crowe said. 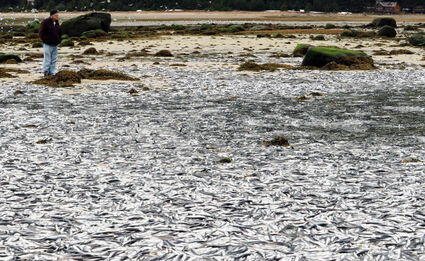 Thousands of eulachon were beached Saturday, April 25 as the tide went out.

Joe Parnell fished on Saturday afternoon. Garbed in a dark, tattered wetsuit, Parnell attempted to net eulachon while laying prone on his surfboard about 20 yards from the bank while sea lions watched from downriver. While he failed to net any fish from the surfboard, he later caught some from a dipnet along the shore.

Sierra and Carlos Jimenez and their children Asher and Hayden like to brine and smoke their eulachon. They fished Saturday and Sunday. Asher Jimenez was among the children who have been stuck at home and saw their friends for the first time at the river.

"They were happy to see people," Carlos Jimenez said. "They love it. I'm sure we'll be going back out there probably not for fish, but just for playing."

The Chilkoot Indian Association tracks the eulachon run with mark-recapture studies and environmental DNA analysis. Last year's run was estimated at more than 20 million fish, nearly double the previous record based on data going back to 2011, Hart said.