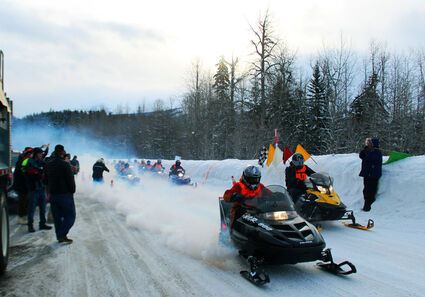 Alcan 200 kicks off at a starting line near the Haines-Canada border.

Melted pistons, blown belts, an engine fire and a broken limb ensured the majority of racers did not finish this year's Alcan 200. The race had 17 entrants, and of those, only six crossed the finish line.

While the race presents a risk for both racer and sled, as well as a substantial financial investment, it is irresistible to the adrenaline-fueled subset of the snowmachine community that embraces the feeling of flying over open road.

Whitehorse racer Ben Sternbergh said while there are other snowmachine competitions like drag racing and hillcross, the Alcan 200 is the only race that gives riders the opportunity to gun it on 155 miles of paved highway.

Postponement and canceled ferry sailings led to a smaller field of competitors at this year's race. Chris Brooks, who had won the last three Alcans, was unable to compete due to an inflexible work schedule. Juneau resident Tyler Ferrin couldn't make it because of the ferry issues, said his brother and Alcan 200 regular Zack Ferrin, who was unable to race due to medical issues.

Zack Ferrin said his parents were relieved when they heard their sons would not be endangering themselves at this year's race.

The number of competitors began dwindling almost as soon as the race began. The 14-passenger van charged with collecting racers who'd scratched picked up its first passenger after rounding the corner from the starting line.

"I melted a piston," said Sternbergh, one of the first racers to break down, as he took a seat in the van.

"There are beers in the back," said Justin Mitman, the volunteer van driver.

Sternbergh said he tested his sled before the race to make sure it was running properly, but he either didn't warm it up enough or didn't give it enough fuel. "If your air-fuel mixture is too lean-too much air, not enough fuel-you generate too much heat and it can melt the aluminum," he said.

Many of the racers who dropped out in the first few miles cited similar piston issues. Sternbergh said that type of problem tends to crop up early on or during elevation changes.

"A lot of winning comes down to tuning the sled, making sure you have the right setup," Sternbergh said. Secondary factors are the capability of the rider and "nerve, how hard you want to push," he said. Luck plays a very minor role, he added.

The first five racers who scratched were breakdowns. By the time the sweeper van arrived, racers were sitting on their machines, looking a little bored or cold. Rick Campbell was sitting on his machine smoking a cigarette when the van pulled up.

People spend thousands to do this, Sternbergh said. He participated in the Alcan for the first time last year. He'd been interested in the race for a while, he said, but last year was the first year he invested the money and time to make it happen.

"No one takes their daily driver (on the Alcan)," said Sternbergh, who after some quick mental calculations said he owns eight sleds, each with a specialized use.

For the Alcan 200, he bought an old sled for a few thousand dollars and made another $5–10,000 in modifications to get it to run at high speeds on the road for a long time, he said. These included installing skis that were closer to the ground and would handle better on a road surface, installing a custom radiator to keep the engine cool without snow to help regulate heat, and adjustments to improve the sled's aerodynamics.

Even once he had a race-ready sled, Sternbergh estimates he spent $1,000 on hotels, transportation costs, race entry fees, and fuel for his sled this year.

While there is a small amount of prize money, it's not much, said Greg Fischer, another racer forced to drop out due to mechanical issues: at most several hundred dollars after the pot is divided among the first-, second-, and third-place finisher in each sled category. And racers split their portion of the pot with the fan who bet on them.

"Most racers are in it for the experience, the need for speed," race organizer Kathi Lapp said.

In addition to cost considerations, racers willingly assume personal risk when they participate in the Alcan 200.

"We have a sled off the road by Nadahini," crackled Jerry Lapp's voice over the radio. He was driving ahead of the van scouting for downed racers. Neva Darling, the only female racer this year, had come off the road riding through a bare, windy section of highway. She appeared dazed as she wandered into the van and said that she thought her sled would start, but she wasn't able to pull hard enough after her crash.

"I thought I was taking it easy, then I ended up in the ditch," Darling said.

Minutes later, Lapp radioed in to say that another racer had gone off the side of the guardrail.

The tracks Haines local Woody Pahl's sled left in the snow indicated that he'd just missed a turn on a particularly bare patch of road.

Exposed asphalt makes it hard for sleds to gain traction. Wind exacerbates the problem. Running on the road for a while can grind down the carbides, further reducing a sled's traction, and making it even harder to stay on the pavement, Sternbergh said.

In general, low snowfall years lead to less snow on the road during the Alcan, creating more dangerous race conditions, said Lowell Narum, Mitman's copilot in the sweeper van. "This has been the trend for the past few years."

Pahl's sled had hurtled off the highway, crashing on the far side of a snow berm. Pahl was thrown 15 feet from his sled, snapping his right leg in the process.

"It was just flapping," Mitman said. "Broken in half with the bone sticking out." Pahl was loaded into the ambulance while sweeper van passengers dragged his sled up the hill and onto the crowded trailer filled with broken snowmachines. The ambulance then turned back to Haines to get Pahl medevacked.

Those who'd scratched piled back into the van. Where before the vehicle had been filled with laughter and race stories, punctuated every now and then by the sound of a beer can opening, the mood was now somber and reflective.

"This is where it gets serious," Mitman said.

While the possibility of injury is present with any kind of snowmachine activity, the probability of fatality or serious injury is higher at higher speeds, Sternbergh said. But "the possibility that you may or may not end up maimed is part of the adventure," he said.

"Wood's a young guy, but he's already got a plate in his shoulder and had facial reconstruction surgery," Mitman said, listing Pahl's snowmachining injuries. "If his nose gets hit again, it's going to go into his brain."

Sternbergh has an 8-year-old son who was on a snowmachine for the first time when he was three months old. "He has his own little sled already," he said. His son came to watch the Alcan 200 last year, Sternbergh said. "He aspires to do anything he considers cool," he said of his son's Alcan aspirations.

"I have a rig that could do it, but I just want to go play in the mountains," Narum said.

"Woody's got kids, he's redoing his boat, he could go broke because of this," Mitman said. "Financial, health, career-wise, you're gambling it all for the chance to go over 100 mph on the highway."

Seven sleds were on the trailer by the time the pilot caravan reached the first gas stop. The race involves two gas stops in each direction. While stopping for gas was necessary back in the '70s when the race began, these days, the stops serve a more ceremonial function, Sternbergh said. According to the Alcan rulebook, racers must touch their fuel cans to their sleds as they pass, but they do not need to remove the cap or stop. Sternbergh said racers calculate how much fuel they need for the race and put that in their sleds.

Last year, his first race, Sternbergh said his sled ended up consuming more fuel than he'd anticipated, and he ran out less than a quarter mile from the turnaround point at Dezadeash Lake. He had to drag his snowmachine the remaining distance to reach the turnaround and refuel.

Joey Chretien from Whitehorse was the first breakdown after the turnaround point when his vehicle lost spark. "It was my first year. I played it safe. I was just trying to finish," he said. "The asphalt sucks, but it makes it interesting. It's not too bad without the wind."

Scott Smeeton was the next to scratch after he "ran out of belts," he said. Blowing a belt is pretty common, so racers bring back-up belts, Mitman said, but you can only bring so many.

"They run better when they're not on fire," said Fischer, the eleventh and final racer to drop out. Fischer said he thought something smelled funny, so he stopped. He opened the hood and saw flames, which he doused with snow, he said.

Fischer said he was the last racer left in his engine class and had been looking forward to winning by default. "For a sled that's been sitting in my backyard for 10 years, it did pretty good," he said.

"Everyone has had a really great attitude," Mitman said of the racers he'd picked up.

"It was definitely a lot of fun while it lasted," Fischer said, shrugging off his disqualification. But "there's a reason why they're called snowmobiles. They're not designed for this... Surviving is half the battle."

Fischer said he had come upon Pahl after the crash and had stopped to help. "'No, no, keep going, keep going,' Woody told me." But Fischer got off and helped Pahl to a place on the bank where he would be visible to the sweeper vehicles, he said.

"There were scary parts. I had to drop below 45 mph on the asphalt sections," Fischer said. But he said Pahl's crash would not deter him from participating in another Alcan 200. 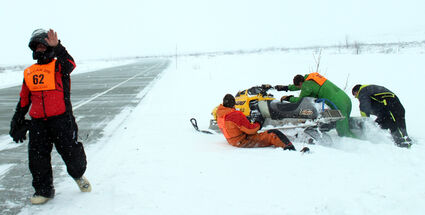 Fellow racers pull Jeff Schamber's sled out of a ditch, allowing him to complete the Alcan 200.

The van came upon Jeff Schamber, another racer who had gone off the highway. According to race rules, only other racers with bibs can help you get your sled back on the road and running, Mitman said. Three racers hopped out of the van and hauled Schamber's sled to the highway. Schambers mounted his sled and sped off across the asphalt. He was the final racer to cross the finish line with a total time of 2:32:17.

An hour earlier, Haines resident Jack Smith Jr. crossed the finish line with a time of 1:28:29, taking first place and breaking his five-year streak of finishing second. His average speed for the course was just over 105 mph. He was followed by second-place finisher Tanner Kulych and third-place finisher Michael Ward.

Smith Jr. was still grinning when the sweeper van pulled in an hour and a half after his victory. Beer in hand, he greeted fellow racers as they clambered out of the vehicle. For Smith Jr. in that moment, as he wandered around smiling and clapping his companions on the back, it looked as though all the money and risk had been worth it.