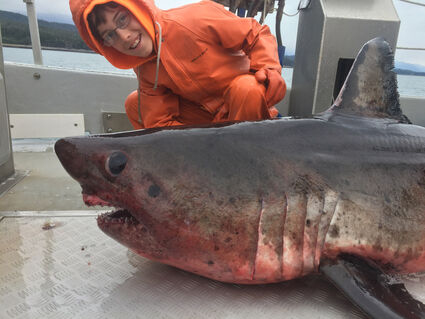 Matt Davis's son helped get the shark on board. Photo courtesy of Matt Davis.

Commerical gillnetter Matt Davis treated his family to smoked shark after the fisherman and his sons untangled the animal from their net at around 1:30 a.m. Sunday morning.

"Frankly, it tastes like chicken, and readily accepts whatever flavoring used," Davis told the CVN this week.

Davis said he was one of several fishermen who were plagued by sharks in their nets this week.

"To my knowledge, at least five sharks were caught and did varying amounts of damage to the nets and caused lost fishing time," Davis said. "It rolled the net up in a real tight twist about 30 corks long, or 90 feet. After unrolling the net and removing the shark, from what we could see, it left three holes about three feet across."

Davis said they caught another shark Monday, but it escaped the net after tearing a 12-foot hole in the net.

The Davis' butchered the shark that had rolled in the net. Davis said because sharks don't have a bladder, their urine is stored in the meat and so they soaked it in as stream of fresh water for two days before cooking it. They then brined it for 24 hours and smoked it at 180 degrees for three hours while basting it in maple syrup and cracked pepper.

"If I had it to do over again, I'd have bled the shark better as much of the meat was ruined by poor bleeding. I didn't really have a way, on my boat to hoist a 330-pound shark by the tail, plus we had to remove the tail to minimize damage to the net," Davis said.

Fisherman Luck Dunbar said catching sharks is usually an indication that the coho run has started. Dunbar also caught a shark. He didn't eat it, but he did name it. "I caught a shark. It sucked. I ended up spending some money at the net mender," Dunbar said. "I named him 'son of a b----.'"